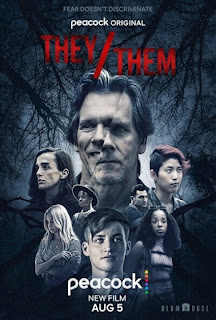 Gay conversion therapy camp meets horror murder mystery would be one of the things to summarize this film. Though it’s an apt setting for a creepy chiller, the simple plot doesn’t leave much room for social commentary. Sadly it ends up being just a limp wannabe thriller drama that soon sizzles out and by the time it reaches its climax, you just feel wtf !! By the way, the title of this Peacock premier film is apparently pronounced as 'They slash Them' which now makes a whole lot more sense than it did while I was watching the film. Based on the title, I was expecting something totally different, to be honest.
We meet various queer teenagers and young adults, including gay, lesbian, non-binary folks who arrive at a gay conversion camp. The leader of the camp Owen gives a big speech on how this has nothing to do with Jesus and their only idea is tome some of these people happier than they currently are. He wants these kids to find a sense of gender normativity, but only if they really want to. Amongst these people which has a mix of every typical stereotypical queer trait that you can possibly think of, Jordan stands out who is non-binary and asks to be addressed with pronoun they/them. The campers soon get involved in very heteronormative activities, psychological sessions etc. These sessions start to provide that Jordan is probably smarter, bold and much more athletic than anyone thought. But it turns out there is also a killer on the loose while this is happening. Slowly we see first the caretaker of the retreat being murdered (he used to creep up on the ladies) and one by one the other teachers and people working there are targeted. By the time the campers realize about the murders, there are already four bodies. When the secret is eventually revealed, it doesn't unfortunately, give you the satisfaction or the thrill.
The film has a lot of issues. With its repetitive scares (probably inspired by I know What you did last summer), it become largely verbose without ever going too deep into any of the topics that it barely touches upon. Race, gender, non-binary, transphobia are all just sprinkled over a basic plot line in hope for inclusion but none of them actually means anything in the actual scheme of things in the film. Even the more discomforting things that happen to the characters have little lasting impact, including the so-called therapists. The trademark athletic guy, who apparently was a student there, his fiancé, who also seems lesbian and they have sex fantasizing of same gender was the weirdest scene ever. Aside from not being very scary, the movie is littered with missed opportunities. A lot of things are just thrown there for sake of it, like one of the scenes I just mentioned. Using a Twink as a bait to seduce a macho gay man also was another low blow. Had the focus been completely on Jordan, rather than thinly trying to spread all over the place and maybe create a power dynamic between Owen, the leader and Jordan (the gender-fluid hero taking on the old guard of toxic masculinity) could have created a much more interesting film rather than a creepy shallow wanna-horror genre.
Although a few dedicated performances deliver some intriguing characters, this tepid slasher thriller is a half-baked attempt at queer horror. Even if it had something worthwhile to say, it would have no idea how to say it. (4/10)

Miisu said…
Now I see a Scandi noir aficionado writing about a horror film that's not Scandi in any sense. We are obviously spoiled rotten by the thorough and detailed crime representation and character building in that genre. Seeing "They/Them" just made me appreciate anything Hannibal Lecter so much more and "Two Heads Creek" just became a masterpiece :D

What "They/Them" lacked for me was this specific tension that keeps you guessing who's the killer and who's the next victim and who'll be the survivor(s). And reading that it bothered you as well - phew, it's not solely my finicky attitude then :D The target shooting scene got my hopes rather high, but the finding of the killer and the reason for the murders was delivered in a weak manner, I'd say. 4 is a pretty fair score, although I'd given 5 - mainly for the character of Jordan.

What was the true horror for me was the whole concept of such camp per se. Secluded old buildings in arse end of nowhere, pointless rules - and staff consisting 100% of perverts. To realize that such camps still exist, in 21st century - that's completely incomprehensible for me. The fact that there are parents who are willing to send their children to such a place with such sick and twisted people, disgusting. For an empath it's truly excruciating to watch. And the after-the-film google made it even worse - wtf there are only 14 (16?) countries in the world where such establishments are officially banned?!

Although the script must have been written in haste, the camera work was pretty good, I'd say. And I really liked the scene with the "... pretty pretty please..." song. It's not my genre of music and I had no idea this song existed, but I loved the lyrics so much I added it to my "for a very sh*tty day" playlist right away.
August 22, 2022 at 11:22 AM

Golu said…
I have to agree with you on the song and dance number. That did come as a breath of fresh air in an otherwise timid film.
Re: banning of such establishments in only 14/16 countries, I believe that. AFAIK, even in US, officially its not banned to have such establishments, but I could be wrong.

This film could have been so much more of an intense thriller and I think its a huge opportunity wasted.
August 23, 2022 at 12:46 PM

Miisu said…
I got an idea and went to rewatch it. The "all over the place" comes from the undecided attitude - a murder mystery or mental cruelty horror - so the script writer(s) compiled everything into one script. And that's how the murders became just jump scares messing with the mental cruelty storyline. It is OK to write two scripts, btw :D And it's so difficult to summarize "They/them" into a simple pitch, unlike "Two Heads Creek" (a post-Brexit comedy-horror about a timid Polish butcher and his drama queen twin sister who travel to Australian outback to find their birth mother).
August 24, 2022 at 1:07 PM

ILHiker said…
I watched this today. I agree with the review but I liked it despite its faults. B-horror is one of my Saturday afternoon go-tos and this fit the bill well. It felt like a throwback to the 80s just a little, obviously modernized. I liked the kids' characters. It could have been more, but I had the sense it wasn't even trying to be, so I don't hold that against it. I just went to my alternate universe where the 80s wasn't so horrifying for gay people and this was one of Kevin Bacon's slasher movies from that decade. Mind you, I had both covid and flu shots yesterday so my judgement may be suspect. I also watched Hypochondriac. I liked it, mainly for the characters, including the wolf. I don't think it was entirely clear what it wanted to be, either, but in a less-good way than this one, so didn't give me either my horror fix, or my mental illness movie fix, or gay drama fix, or mother issues, etc.
October 15, 2022 at 5:43 PM

Golu said…
hope u r feeling well after the shot!!
and yes, we all have our vices and if 80's gay campy horror, then why not!!
In the non gay stuff, there are so many things , trashy ones. that I watch, which I would be very embarrassed to admit in public.
October 16, 2022 at 6:07 PM