Queercore: How to Punk a Revolution (Documentary) 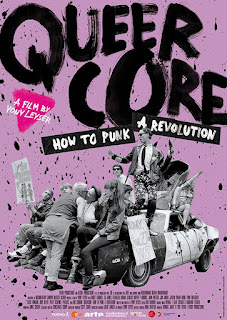 This is an English-language German documentary film about the social and cultural movement known as Queercore. Queercore was a cultural and social movement that began as an offshoot of punk and was distinguished by its discontent with society's disapproval of the gay, bisexual, lesbian and transgender communities.
The documentary starts with tracing the roots of Queercore in Toronto where queer revolutionaries were rebelling against macho punks in a bourgeois gay scene. Using multiple overlapping interviews, the film maker details the movement, the overlapping philosophies with punk, and the nuances of what the scene offered to the queer identity, which was ultimately about the shared goals of fighting the dominant ideology and its structures. In the second half, it shows the growth of the queercore music scene and bands including Tribe 8 and Pansy Division that came up alongside acts that went mainstream.
At some point, it started to feel repetitive because every interviewee had pretty much the same thing to say, but to a novice like me, the documentary still gave me an insight into Queercore (something I had never heard of before) and queer punk, which I had heard of, but had no knowledge or interest before and nether do I think I will. I believe many people were disappointed with no representation of People of color in this doc, especially since they are the ones who are taking Queercore forward, but as I mentioned I would not have any insight into this. Personally, I don't identify with punk scene or music at all. So I had no specific interest as such in watching this documentary. Having said that, the film is an important document capturing the influence of queercore, an underground movement that enjoys life on the fringes, where identifying as an anti-establishment is just as important as sexuality. (3/10)