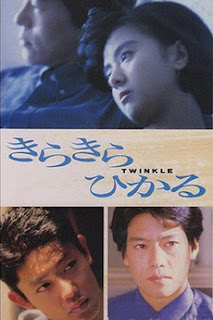 I can't remember the names, but I have fir sure seen similar films about marriage of convenience. The fact that this film came back in 1992 (almost 30 years ago), is what makes it very special and interesting. Sure it doesn't take sides or even give you a satisfying conclusion, but thats understandable given none of the protagonists is really right or wrong. They all have their individual issues and they are trying to fit in the moiety in their own way.
Mutsuki is a successful doctor and has a boyfriend Kon. Shoko, a girl coming of marriage age,  on the other hand is a translator but is also an alcoholic and also has been released from hospital (we are not told the exact reason). The duo meet through their parents and tell each other their secrets and still get married. A marriage of convenience is of course not a magical solution to their problems. Kon is understandably not happy about seeing his boyfriend getting married and moving in with another person. Shoko is also feeling lonely in this platonic relationship. The situation for these three people will gradually get rockier. Mutsuki doesn't say much but is probably the one person who is dealing with everything the most. Eventually the parents find out about it and pressure the couple for a child. Kon and Shoko strike up an interesting friendship which annoys Mutsuki even more. The pent up anger eventually bursts between all three but maybe there will be a way for the trio to work it all out.
The drama is interesting and like I said I have seen a similar them Japanese movie before, but here it was difficult to connect with any couple. We are given so little about Mutsuki and Kon as a couple. I'd liked to have seen them more as a couple because they seemed to me just like friends. Surprisingly, Shoko's and Kon's friendship keeps the movie light and there are some interesting funny moments when their camaraderie annoys the doctor. The film has a lot of long drawn scenes where nothing much happens but it is a way to show how the lives of these individuals is going on with the emotional struggles they are facing. The movie is not trying to tell you what's the right thing to do. They individuals are trying to fit in the heteronormative society of those times in their own way and are struggling to make sense of it. Clearly none of them has thought through the whole thing. Three people compromising their emotional life and love, full of angst and sadness as they live a lie. Overall, a decent and charming film. (5/10)