The Moment: Since (Thai Mini-Series) 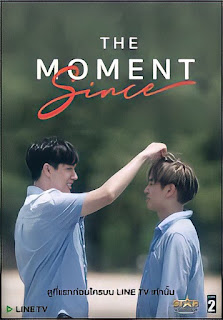 The sequel to the original series follows Bay and Mok and their new love during their beachside vacation. In this five 15-minute each series, the couple is trying to spend sometime together but something keeps interrupting them. Sadly, there is nothing in the name of story here in the show. Literally as the title suggest, it feels just like watching moments of a newly couple trying to confess their feelings and nurturing them.
As Bay's birthday approaches, the duo decide to go to beachside resort of holiday. Tok is hoping that he will use this opportunity to take their love further. Unfortunately, Bay's boss Boston, who has a secret crush on him, shows up at the same resort with another friend Jimmy. Now Tok has competition not just from Boston but also from jimmy who shows more than a keen interest in Bay and is not shy from making it obvious. Mok also feels inferior to the two men, since Boston has an accomplished reputation and Jimmy is smoking hot with six-pack abs. Despite constant interruptions from the two uninvited guests, the duo do manage to spend sometime together finally leading to that first kiss. Initially shy, they both slowly overcome their hesitation, start to get comfortable with one another and maybe this is indeed a start of a beautiful relationship.
My first thoughts after finishing the show was what was this made? And mostly because there is nothing here in the name of story. It sadly exists. There is one full episode of the two men drinking men, walking around and just feeling Lovey-dovey. The scenes were so slow. I understand to emphasize on love and growing fondness and what not, but I do feel that the way these two supposedly grown boys were behaving was more like a 15 year old teenage would behave. I feel some of these BL shows need to come out of the cute romantic filmy fully stuff and be more realistic and natural. Many events in the show are just happening and really add nothing to the story, which as I mentioned earlier hardly exists. The only one good thing about this show was the mouth watering hot six pack abs of Jimmy. The moment he takes off his shirt, I was not expecting what I saw and Mok's expressions at that moment are priceless. The acting was alright, the guys are cute but please give us something more. I guess I am too old for this over the top romantic stuff which is so romanticized in people's fantasy and reality is something so different. This mini series was worthy of just a short film, a very very short film. (4/10)