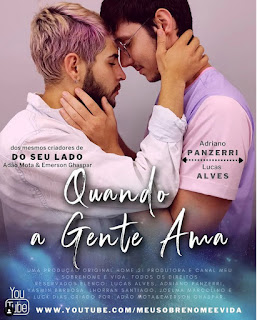 This six part Brazilian series feels very amateurish, almost like a student's school project. Even though the episodes are just 25 minutes each, they just feel so dragged on, because really not much is happening. It is full of cliches, some very basic acting and some very poor direction. If this was indeed a school project, I am willing to be lenient; but if someone thought of it as something serious, they are in for a rude shock.
Ben, a young teenager from the countryside has just arrived in to city for college after receiving scholarship. In his apartment, he meets Edu, whom he mistakes to be his roommate. Every time Edu wants to tell him his reality, Ben just doesn't let them speak. On the first night itself they kiss and have a short passionate affair, till Edu's secret is revealed. He is actually the ex-tenant of the flat and is being evicted. Ben is heart broken and asks Edu to leave immediately. Enter Samuel, his actual roommate, who it turns out is Edu's sister's younger brother. When Samuel sees that Edu is sleeping in the park on a bench, he brings him home, unknown to Ben and Edu's past. Ben is not willing to forgive Edu but at the same time he also feels an attraction to the bisexual Samuel. Eventually when his anger does down, now he is conflicted between choosing between two boys. Things get worse, when his conservative mother finds out. How Bend deals with all these situations is what the show is about.
From synopsis it may feel that there is a whole lot going on in the show, but trust me, it drags in various places. Things are just too convenient in the ay they happen. Edu's ex-girlfriend's random appearance in their lives, makes the whole proceedings even more convoluted. How did she even find they apartment if they had broken up three years ago? The boys falling in romance happens out of nowhere. Just about anyone just enters and leaves the apartment at their will. No explanation is given to Ben getting attracted to Samuel. Maybe they are all just horny teenagers, but they actually do nothing beyond kissing. Talking of kissing, many kissing scenes are just thrown in for whatever reason, even when they didn't make sense. Also kissing has never felt so boring as it has in this show. The direction is terrible. The actors probably did their best but they all look very rehearsed and mechanical. They just didn't have any chemistry. Edu's back story is interesting but has absolutely no relevance to the whole plot. Other new boy is thrown in as Samuel's possible love interest and then towards the end of the show, almost everyone leaves the city. It was just bizarre and all over the place. I am starting to appreciate the little quirks of Asian BL shows and how they have improved over a period of time. Let's hope next time Brazil gives us a much better show. Some of the gay films from this country have been great, so we can surely hope. (3/10)