Tom Daley: Illegal to Be Me (BBC Documentary) 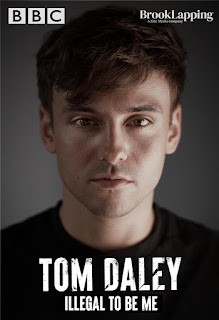 Olympic winner Tom Daley, who is openly out gay man in the sports world, embarks on a journey to explore the shocking realities of being a member of the LBGTQ community during the Commonwealth Games, with homosexuality being illegal in half of the countries included in the competition. While most people are only familiar with the lighter side of Tom, this show proves that he can give a serious topic the kind of thoughtful and weighty treatment it deserves.
For most of the past year, Daley has been vocal about his call for sporting organizations to be inclusive of LGBT sports folks. Echoing this at the start of the film, he asserts that the Commonwealth Games should consider preventing countries with anti-gay laws from hosting the event. But while speaking to LGBTQ athletes in person, Daley learns firsthand that they don’t believe such a punitive punishment will help their situation. As one of the anonymous Pakistani athletes informs him, the rulers of their country wouldn’t be fazed by being forbidden from hosting the Games and such an action wouldn’t change anything for those who have to live there. Instead they prefer a more inclusive approach, by probably proudly displaying the rainbow flag, which will be a reflection of the genuine support of Commonwealth community. To Daley’s credit, he makes a genuine effort to listen to what they have to say and soon realizes that bringing the rainbow flag into the Birmingham Games will be provide more hope than any ban. From Pakistan, he travels to Jamaica and does manage to met one of the openly gay athletes who is dual citizen of UK and Jamaica. But anyone els whom he meets are scared to reveal their identity and meet only in secret at very secluded places. In a very beautiful climax, Tom Daley invites six activists and athletes that he met during the filming to carry Pride flags as he brought The Queen’s Baton into the Opening Ceremony of the 2022 Commonwealth Games and  it was his way of telling all the athletes he encountered that what they had to say mattered.
It's been after a really longtime that a documentary moved me and touched me in ways that is hard to explain. The climax where Tom runs with Queen's baton and six rainbow flags waving around is a moment I will not forget. It brings the respect and recognition that LGBT members deserve and a firm standing that we are not going anywhere and are here to stay. To be honest, I don't know much about Tom Daley as a person, but he way he has conducted the subject, himself, the interviews, the empathy, this man needs to be congratulated and thanked for his excellent and intelligent reporting in this beautiful documentary. There is so much that this documentary shows us. Its not easy to watch when you hear stories about how people live in fear. But these are exactly the kind of things we wanna be showing and making people aware of. Its heartening to see when someone in a position of power and influence use it to spread an important and vital message. It really is a documentary that needs to be watched by all, whether you’re a sports fan or not and I doubt if you will be able to control your emotions seeing how beautifully it ends with one small but significant victory. (7.5/10)