Sin ti no Puedo (Spanish) [Can't Live Without You] 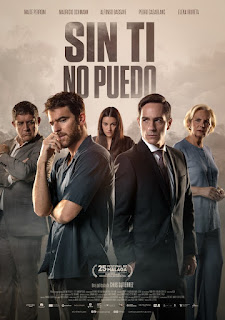 I knew nothing about this film, so overall I was actually quite happy with the ultimate result. The film doesn't spoon feed you. The viewers have to deduct a lot of inferences and the brother-sister cat and mouse game keeps the proceedings interesting. Sure, towards last 30 minutes, it does get predictable and you know what's going to happen, but still the two very good looking men and a high production quality helps this film to rise above the average script that it does have.
Alex and David are a happy gay couple, who have started talking about adopting a child. Alex works at a gym and David has some high profile corporate jobs n they are doing well for themselves. A mysterious figure Blanca soon starts following the couple and she strikes a friendship with Alex at gym, flirting with him. He brings her home for a drink but when David comes home, it turns out that she is David's estranged sister who has come out of jail having spent 8 years for buying down their parents house and thereby killing them. She keeps saying that she didn't do it but she is a dubious figure. By various tricks, she manages to embed herself in the happy couple's home despite obvious animosity from David towards her. David's ex-boyfriend Angel was their lawyer who made sure she went to jail. But now Blanca has found out new evidence that can prove her innocence through her previous boyfriend who is a drug addict. But before Angel can talk to him, he mysteriously disappears. Because of Blanca, Alex and David's relationship is starting to see a crack. Using this Blanca ends up seducing Alex, has sex and becomes pregnant. David has had enough and he calls it quit with Alex to temporarily move with Angel. But Angel has discovered the truth behind David, Blanca and the whole episode of why really happened many years back. No one is what they seems to be.
The production quality of their film is quite good and maybe its the two gorgeous looking leads, who have the perfect bodies and spend most of the film shirtless, but I was totally into the film. Blanca's character was so mysterious and evil yet enigmatic, you wanted to know what next she will do to disrupt the happy life of this happy couple. The surprises keep coming and that kept me hooked. But once they show David is sports shoes, I knew exactly what was happening and who is the culprit. The pacing of the film was good and there were no slow moments. Initially I also kept wondering why was David with Angel is his earlier phase, but its towards the end we realize how David must have used him and suddenly things became clearer. My one problem with the film is the many unanswered questions of how and why? Sure we find out eventually who burned the house, but why? And why did Blanca end up in jail? Why does Blanca want revenge with David? Does she want revenge or did she genuinely want her brother back? Or was she only interested in money. The motive of neither Blanca nor David was ever made clear. Sure they are both grey characters and probably had a messed up childhood to end up being where they were, but a little more clarity would have helped analyzing the psyche of their character. But other than, the film was visually appealing, there were tense moments, good looking cast who also acted quite well and no unnecessary side tracks or stories. The movie was overall a good fun time pass. The film ends in future, with clearly a good scope for a sequel if interested. (6.5/10)

Golu said…
I am not sure why your original comment on this post is not showing up but ILhiker, you are right that this film " It sort of felt shoehorned to be made as a gay-themed movie. "
October 16, 2022 at 6:56 PM