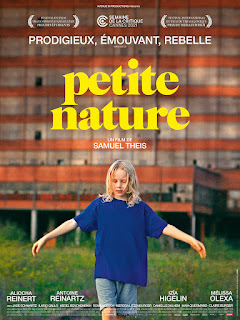 This film is an interesting take on intersection of social class and age exploring a coming of age story a ten year old boy's sexual awakening. IT sounds wrong, but th film is actually very tastefully done, as you can imagine, with a subject of a child's budding sexuality, things can definitely go very horribly wrong. Thankfully, keeping an authentic location, some really good acting and strong character development makes sure the film stands its ground.
Set in town of Forbach, a community township sharing France/Germany border; we meet 10 year old Jonny, who has had a turbulent life. He now lives in a housing project with 2 siblings and a single mother who is just leaving a man after an abusive relationship. At the local middle school, his intelligence and sensitivity captures the attention of his new teacher, Jean, and somehow Johnny feels comfortable with him. One night after a heated situation at home with his mother, he runs to the teacher's home and luckily even Jean's girlfriend likes the boy. But Johnny’s affinity for Jean runs deeper than his lack of a paternal figure, leading to uncomfortable situations for all parties involved. In summer, one day he randomly shows up at his home, takes off his clothes and tries to seduce the teacher who is horrified by the whole thing and asks Johnny to leave immediately. A very heart broken Johnny doesn't know what to do, but time flies and the school restarts and hopefully the life will continue with both Johnny and Jean having moved on from the incident.
The child actor playing Johnny is unbelievably good. There are so many scenes that stand out in the film. Some of my favorite ones are between Johnny and his mother. The mother maybe flawed, but in her own way she very much loves Johnny and wants the best for him and cares for him in her own way. Some of their conversations do give us an insight into that. The proud in her eyes towards the end for his communion was amazing. And the explosive dinner scene when Johnny bursts out in anger after being rejected by Jean was a master class. The film works at its own pace and does wonder. Just be patient and soon you will be deeply involved in Johnny's world. Something so relatable to his character yet so far, its hard to explain. The ending is also quite poetic with Johnny dancing by himself looking into the mirror.
I liked this tiny little beautiful coming of age film. Set in a specific place concerning specific people, it tries to present a situation as normal as anything else. (7/10)