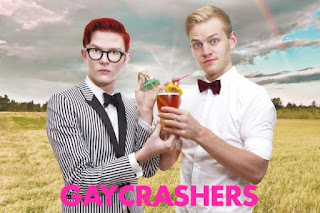 This comedy documentary follows two young Australian gay comedians, Joel Creasey and Rhys Nicholson, as they put on a show in a rural Australian town Colac known for its homophobia. In fact, last time Joel was there, he was chased to his car by a group of 20 teens hurling anti-gay abuse at him. With Rhys for back up, Joel is heading back to the town to live there, sell some tickets, get to know the locals and work out how homophobic this town really is.
When Joel had the incident, the mayor of the town of Colac city against accusations of homophobia, which is one of the reasons that Joel along with Rhys decides to give the town one more chance. They reach the town and meet the new mayor who welcomes them into the town and admits that smaller towns often need a while to “catch up”. Then the pair travel around the town, trying to sell 700 tickets to their upcoming show. Most of the people they met along the way were very welcoming. During this time, they try out working at a factory, bartending and meeting people at multiple locations trying to make connections. There were some funny incidents like a woman at a bar asking them if they planned to be gay by the time you are 50. Surely there expectation was huge because not even 100 people show up for their show, but they still entertain audience as true showman.
The documentary is your typical “fish-out-of-water” scenario, with Creasey and Nicholson getting to know the town in their skinny leg trousers and bow ties. In the end, as you’d expect, the people of Colac and the young comedians bond over their similarities in a classic “we’re not so different, you and I” situation. The comedians were hoping to use comedy as a tool to loosen people up and open up conversations with people they wouldn’t necessarily associate with otherwise. And I think they were successful. Given the documentary is crispy 30 minute, short, its easy breezy to watch. (5/10)