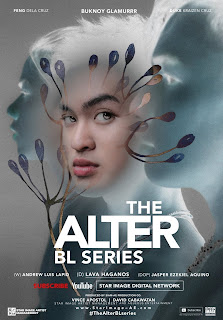 Not every story idea that sounds good on paper translates well on screen. The series, which did promising was so bad in acting, direction , editing and just about everything. The only saving grace was the decent job done by the lead actor but even that couldn't save the mess of a series that this show is. Thankfully 8 episodes of about 10 minutes watch doesn't make it stretched beyond its welcome time. And don't get fooled by the poster. I don't know why the makers gave a sci-fi feel to the poster and the guy is not even half decent looking as it seems in the poster.
Elmo has just returned home from US to visit his twin sister Sarah after breaking up with his girlfriend. Once home, Sarah tells him that she has been dating two guys at the same time and she would need Elmo's help. He will need to dress up and pretend to be Sarah and be with Nathan, while Sarah spends time with other guy Jessie. The condition is to not kiss or have sex and if such a situation arises, to just call her. This goes on for a couple of days, till Elmo can't take it anymore and tells Nathan everything. Heartbroken Nathan comes back a few days later and confesses to Elmo that he is falling for him and that Elmo needs to accept he is gay. Jessie finds out about this and tells Sarah, who in turn gets mad at Elmo for being unfaithful to his sister, to which Elmo gives her a good class. Then randomly in the end, Elmo has a new boyfriend and they are throwing a party where Sarah hails trans people.
The ending was so wtf!! It's almost like the producers, directors, writers, cast etc. didn't even bother making this a cohesive story. I feel like a couple of episodes were just snipped after Episode 7 and series was just ended in finale. Sarah did not deserve a happy ending at all. Elmo forgave his literal abusive dad way too quickly. And Nathan deserves way better. We did not even get to see what happened to Nathan and Jessie and why did Elmo now have a new boyfriend. Also the trans angle in the end was very confusing. Was Sarah supposed to be trans all along? Why was it never made clear? Anyway, besides a bad screenplay and awful direction, the lead actor playing Elmo/Sarah tries his best to do a convincing job, but everyone else like the two boyfriends or the housekeeper or even the p[erson who trains Elmo how to act like Sarah were all sooooooo bad. I used to think there cannot be a worse show than Amore, but this one falls pretty much at the same level. (2/10)