Love In Spring (Korean Series) [Crush of Spring/Spring of Crush] 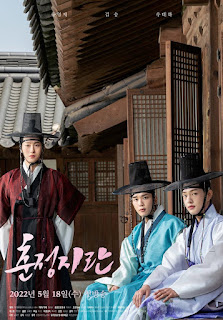 Why? Why? Why? This show is almost a rehash version of Nobleman Ryu’s Wedding but minus the comic fun elect from the show. We know the premise of a man pretending to be a woman and marrying another man could lead to lot of funny situations. Unfortunately, this series take this concept and drama too seriously with extended back stories of characters and too many sub plots. The show at 16 episodes of 30 minutes each is way too long in the first place. To top it, its just not fun to watch. This show is a good example on how to bore your audience.
A slave boy is trying to run away from his master but saved by an older nobleman. He convinces him to pretend to be a girl, his daughter from an illegitimate wedding. He does that to save his life. After few months, nobleman somehow convince him to marry a man who has fallen for this girl. Then we have another  man who comes into the picture who was apparently either friend or master of this boy (girl) and was in love with him. Somehow I am not very clear why this boy was running away. At some point a love story begins, usual confusions happen and then a random ending of the show.
By my summary the show itself you can guess how bored and uninterested I was in the whole show. Actually now that I think of it, it wasn't really a BL or even a bromance show. The storyline was too bland and was all filled with so much queerbaiting. The production quality is good and you would think that the historical setting would make the show interesting at least, but only if!! There’s a lot of voice over thoughts, people explaining what is going on to the viewer, and also talking to themselves as exposition. None of this is good. It’s a big cast and high production values for such a crappy script: quite the soap opera, but a really bad one. Even the love triangle aspect seemed completely forced and bland. In the end, this drama was all over the place with uneven acting, narrative, and focus, which meant no one; actors or viewers, took anyone or anything seriously. Its 2022 and we definitely deserve better stories and treatment. (1.5/10)