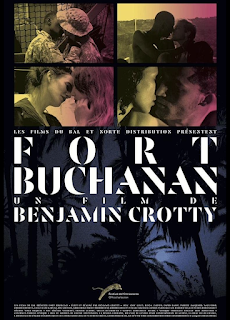 This feels like an indie film with minimal budget discovers a kind of queer Petri dish of Army wives left to make “adult play dates” with each other while their husbands are stationed overseas. I am really not sure where this movie was headed because it felt in the realm of fantasy and surrealism. Although the film is supposed to be set in a military base, it feels more like a summer camp with grass and greenery and long distance huts.
The film starts with Roger, who is raising his daughter Roxy while his husband Frank is out in Djibouti for 6 months at a military base of Fort Buchanan. He has raised their daughter pretty much by himself. He hasn't had much sexual connection with his husband and has ben on his own. Then there are about 4-5 other wives of military men who advise him that he should go outside marriage and have sex because that is how they save their marriages. One of them even demonstrates by seducing Roxy. There is another man George, who is gay (I think his husband is dead or something) , who trains Roger. Next thing you know is all these people are visiting Frank but things don't go as planned. We see that Frank is trying to avoid Roger especially for any physical intimacy and clearly there is some gap. Roxy hooks up with a military man. Season changes, Roxy is now pregnant and Roger is eagerly looking for the baby to come. We are now told that the base is closing, and in last 15 minutes a new character is introduced and who commits suicide because he doesn't know what else to do. The film ends with lonely George asking Roger out on a date.
The film is an interesting look into the life of a number of mostly-sexually frustrated army spouses. It is an imaginary world where almost everyone has the potential to sleep with a member of the same sex, even if they’re married to someone of the opposite sex.The good thing is that film is set in France where gay men were allowed to serve military. The story is interesting, but the way the film is directed is a very different art form. Its neither episodic, nor theatrical and definitely not your typical film. Its confounding yet frustrating, fulfilling yet odd. It feels amateurish yet very accomplished. Thankfully the film is saved by its almost just one hour length and some great performance by the lead actor playing Roger. Other than that, to be honest I am pretty much at a loss of words on what do I write here. When the film rushes off to its end, it’s hard to determine exactly what it wanted to demonstrate, and distance only makes the details fade. It’s an easy, sometimes amusing watch, but also an unfulfilling one. Its really hard to box this film in any genre or anything like I have seen before. I didn't like the film very much but I would still wanna recommend it o watch just because it is so unique and different. (4.5/10)