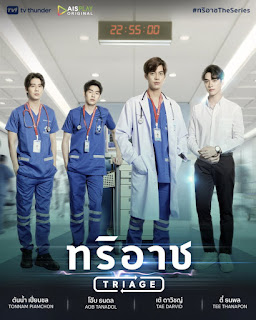 A time loop drama with BL love; wow!! You can't deny the fact that this is something brand new in the BL world. The story is complex, the setting medical. And instead of a straight forward romance, the proceedings are complex because the main character is stuck inside a time loop. The two leads go on an extraordinary adventure with time manipulation, mystery investigation, and epic romance. The show is 13 episodes with each about 45 minutes long.
Tin is a resident doctor who works in an emergency room. One night, two men arrive in critical condition. A young drunk driver Tol and another victim on whom Tin focuses more because of severe injuries. Sadly they both die at 10:55 PM. The superior boss Dr. Sak suspects that Tin is partial to treating drunk truck driver because his sister died in the same emergency room few years back. Tin goes to sleep and when he wakes up, he finds himself in a familiar time loop. He has been transported to the previous evening for some inexplicable reason. Once again, he must try to rescue the two patients after the car accident. This time, Tin focuses his treatment on Tol, trying to save him. But they both die again at same time. A mysterious man Jinta shows up in front of Tin, reassuring that he is not hallucinating. Tin wakes up again in the loop but this time he is more reassured and is prepared to treat Tol as soon as he arrives, but how much ever hard he tries, Tol ends up dying at 1055. Jinta keeps coming back and Tin demands explanation but all he is told is that Tin needs to save Tol's life to come out of time loop. Eventually, along the way he gradually uncovers more and more of the mystery of what happened, and draws closer and closer to Tol, the man he has to save. He makes Tol fall in love with him day by day, while a parallel track of organ harvesting is going on. Tol's death is connected to multiple other events and Tin will have to make them all correct. Somewhere mid point, When Tin is able to explain Tol everything thats going around, Tin gets shot. Now its Tol's turn to save Tin's life. Luckily Jinta appears again, and explains the time loop concept to Tol, who eventually with his love and persuasion is able to correct many things that Tin was only partially successful in.
The first few episodes were ok for me but the show soon got my interest. I realized that it is actually a well done and well thought through show and the way every layer was peeled one by one in multiple episodes it just made sense. This BL drama about time manipulation seems revolutionary, like a daring departure from the standard romances in the genre. The show challenges the viewers to pick up on intricate details to piece together a clever mystery in every single episode at least in the first half. Thankfully, within the whole conundrum of time loop, there is a beautiful love story woven in between Tin and Tol. It takes a while before the romance is developed but eventually  the romance feels epic as the lovers overcome death, danger, and destiny across multiple timelines. The two actors do a great job portraying their roles and their chemistry is indeed quite good. Tol, although his character wasn't as strongly written, somehow stood out more for me, probably because of his good looks. Tin is also actually very good.
Most of the show is written and directed really well until the last 3 episodes where the focus shifts to Tol. Suddenly people's personalities change, to the point it doesn't feel like we're dealing with the same characters anymore. The story also starts to take a lot of "cheats", where the "rules" of the setup are changed in fairly silly ways - like all of a sudden kisses restore memories of past time loops. I understand we are watching a show and we have to take certain liberties but when most of the show is top notch, these creative liberties stand out like a sore thumb. Also how does whatever is written in a diary stay there in a time loop. Won't all that disappear too? But hey, now we are getting too technical. The show was doing well but the finale was a bit random for me and also by this time the show was stretched in multiple storylines that the ending is flat and anticlimactic.
Overall, the show need to be recognized for a very innovative story and plot told in an intelligent way (until its not). In the myriad of thousands of BL shows thrown at us, this was a breath of fresh air and could have been extremely good, if not for the sloppy final episodes. (7/10)

Sailor Maan said…
Great series I loved it! I have the same feeling as you : started off just OK, then got me increasingly addicted, both by the romance and the misteries. And then the end falls flat, especially since I felt the core thing (why this time loop with those 2 specifically) was not really explained. But everything in between was fantastic, literally and figuratively. Can't help but being moved by those guys that had to meet the man they are madly in love without them having any memory of it. It's at the same time sad and beautiful and tragic and so romantic... Especially when writers were clever enough to switch the time loop. They indeed changed the rules in the end, but I didn't mind the magic kiss, I'm all in for Disney magic anytime XD
August 16, 2022 at 4:00 AM

The show was smart and I did enjoy the whole process of the guys finding out why the time loop and how to get out of it, only if it could have added in a better way.
August 16, 2022 at 8:49 AM

Miisu said…
Let me start by stating that I don't like hospital series - they make me smell the germicide, rubbing alcohol, fear and anxiety and trigger me right back to 2010, into a certain hospital and an operating room. The "pleasure" of being an empath. Therefore, for obvious reasons, I kept this series on my list, just occasionally reading the synopsis over and over again, but never started. Because - hospital. And then I watched "Manner of Death", by the same author. Loved it (despite one very idiotic event... not spoiling :P ). So I decided to give "Triage" a chance.

Glad I did, phew. The hospital scenes still made me flinch, but everything else was really well written and researched, both the ER specifics and the timeloop mystery. Plus there were CATS :D The best timeloop film I have seen was Bruckheimer's "Deja Vu", and this series pulled me in just the same way. I didn't make notes in a notebook, but there were moments I seriously thought about it. Thinking along the events, going back and forth in time felt like standing at a crossroad of choices with nothing else to rely on but gut instinct and trial and error. I loved seeing the slight changes in the characters in every timeloop - except the uncharacteristic features in the last few episodes. The badass organ thief being scared of the police and running like a rabbit... really? But it was redeemed with him getting hit by the karma bus, so I'm not complaining.

I thought about the elements that didn't change in time - the lake, the clock tower and the diary. The case of the places seemed logical, like the laws of physics work in the boat during the storm - the stern and prow move up and down while the very center moves relatively a lot less than the extremities, so the passengers who know that they would get seasick are suggested to find the most central place on the boat, sit upright and close their eyes. The lake and the clock tower seemed to be the most calm locations in both of the protagonists' lives, so it would feel like time standing still for them. Reminds me of Andre Aciman's "Find Me" where a certain place in Rome has the same kind of effect on Elio every time he visits it.

The diary, however, has me puzzled as well... I have a theory, but need to check it first :D While waiting for the next series by the same author, who's luckily quite productive :)
January 23, 2023 at 9:18 PM

Golu said…
I didn't realize you were so late to the 'Triage' game buddy. I agree that slight changes in the chapter behaviour in every time loop was a nice little touch :)
PS: I didnt realize how many foreign films you see :)
January 24, 2023 at 8:50 AM