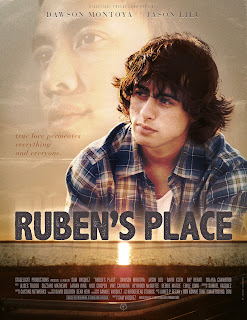 This indie film has its heart in the right place but the execution is slow and very amateurish at places. I felt myself yawning and hoping that the story move faster. Mind you, it wasn't boring or anything, but I attribute a little of that t o my personal situation as well. These days I am all about quick and fast stories, unless there is something very ethereal and blissful to spend lingering moments enjoying it.
Ruben is a young guy taking a break from college to take care of his alcoholic father. His mother had died in a deadly hurricane that hit their town after which any of its residents have already left. Ruben has no friends, and so his father contacts his brother to give him some job to keep him busy. It doesn't take long to figure out that the uncle is in some kind of drug business. Ruben seems to strive with the business and not too long in the movie his best friend Jimmy from junior high returns to the town. They soon start hanging out and it feels they have some story or relationship from before but we are never told about it. Jimmy shows his old art work that he did many years ago and Ruben convinces him and his uncle to exhibit that as a art show in the warehouse that he works for his uncle in. A member of the city council stops by and he decides to make this a visitor center because the artwork has all memories of the glory that this town used to represent. Jimmy and Ruben start a beautiful loving relationship and surprisingly they are well accepted by everyone and they can be themselves. The uncle moves to anew town, father quits drinking and eventually things are all falling in place.
The film is not earthy shattering or anything but is sensitive and trying to show and emphasize how things are changing in one's life and how you have to continue to keep moving. I Was unsure where the film is headed because it felt that it kept changing the mood and genre at many places. The actors give a good show and you can see that they are very sincere in their portrayal  of their characters, but the problem is none of them is charismatic or exciting to hold your attention. Yes, they do a good job of projecting the character but when the character itself is supposed to be dull, there isn't much that actors can bring to the table. I just wish there was more to romance of Jimmy and Ruben and we got to see more story to that. Jimmy's character was so plain and basic, that it was hard to connect. Ruben's uncle was the only lively person who had some gravitas. The story that the writers/director are trying to get across is a good message, and for a low budget, independent film it is alright. The film is neither a coming out film nor a redemption. It is somewhere a mishmash where everyone in their own way is dealing with their grief and issues in life and just need to move on. Thankfully it is set in a work where homophobia doesn't exist, there is no unnecessary drama despite the uncle dealing with drugs and all and overall a happy ending. (4.5/10)

Miisu said…
I was so sure that you have already watched and reviewed this film a long time ago. And also glad that I'm not the only one who had the same uncertain feelings and reactions :) I watched it about 2 years ago, luckily before "Esteros"*, and in about half an hour into the film I was already feeling kinda left out. I wanted to know this and that, but also felt that it's not my business to know. Hmm... I watched on and hoped this confusion will fade, but sadly it didn't. I usually love anything in the "inbetween" category, for example all books by Karen Swan (chick-lit -but not really, crime - but not really, time travel - but not really), but this film was too inbetween even for me. It didn't pull me in although I was ready for it.

Golu said…
Yeah this was definitely one of those films which are like, you don't feel like continuing to watch, but then also you cannot stop midway. One of those weird feelings
August 28, 2022 at 6:15 PM