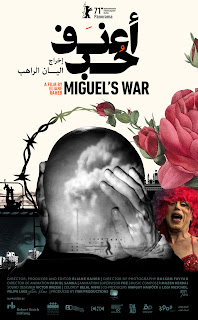 I have very mixed feelings about this one. The documentary has received several noteworthy awards and it feels like a therapy session for our protagonist, but I was struggling to get a sense of where is it all going. It started off as a man's journey who changed his identity, moved from Lebanon to Spain and through this film he was trying to reconcile his past, but in the duration of over 2 hours, more than half the time is gone into taking about his sexual escapades, fantasies and tricks that he has done. And only sparsely do we see him an Thera him talk about his childhood, his memories of war which gets frustrating. Thankfully it all seems very honest and a charming lead makes us continue to watch the documentary.
Miguel’s life story begins in Lebanon, where he was born in a conservative household. Eager to prove his toughness and escape from the shadow of his more traditionally masculine brother, he decides to enlist in the army during Lebanese civil war, where he possibly witnesses sexual, ethnic and armed violence. While his humanity is under threat, his sexuality is further emboldened. Post war he decides to move to Spain for a chance at freedom. He changes his name from Michel to Miguel and indulges in a life of sexual debauchery of many years with 2000 plus men. He regrets not having loved anyone and as his past continues to haunt him, he agrees to revisit his pain through the medium of film trying to recount events and past stories, including that of a man names Tony, who helped him flee the country and on whom Miguel always had a crush on (or at least that's what he remembers).
The first thing you notice in this documentary is the very different style of film making. There is animation, actors auditions to recreate some scenes that Miguel is recounting, the arguments that the director and Miguel have; are all beautifully captured. We do get to witness Miguel's sense of his love-hate relationship with family and home, his lingering inferiority complex and the ultimately empty sexual exploits underpinning his newfound identity. As I said before, somewhere the film goes into focusing so much on his sexual life that you are just not sure where this is headed. You never see an attempt at the reconciliation of the past, which was the whole point of the film. The big picture here is clearly missing. We never really get to know who Miguel is beyond the fact that he is a gay man who loves to have sex. I mean, thats probably true for a huge gay population. There was a reason this subject was chosen as potential for a documentary but alas, its never used to full potential. We see snippets of him as a drag queen, a singer, a filmmaker and an interpreter, but we are largely left to assume whether these are hobbies or career interests. Also, I felt, at some point I wasn't sure of Miguel was telling the truth or he was making up story or maybe he has suppressed memories and he was really trying the best he could. I wanted to like this documentary because I think it had huge potential, but sadly the film was far from being satisfactory. (4/10)