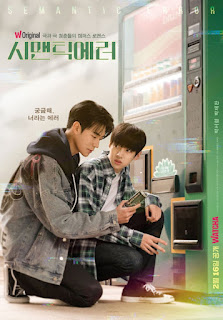 Now this is how you tell an engaging story. Just a couple of days back I was complaining about Plus and Minus series, whose biggest problem was weak characterisation. Contrary to that, this show, which is also a love story at heart, has two very strong and amazing protagonists who both have their quirks, but somehow fit despite their differences. The relationship is volatile filled with petty pranks and  arguments but its their sassy attitude and a sizzling chemistry that keeps the show afloat. Also with just 8 episodes of about 25 minutes average each, it was such a easy watch. It keeps itself focussed on the main story without any unnecessary side troops.
Sang Woo is an antisocial student, who is very focussed on his programming and needs to finish his project. He is independent, prefers logic over emotions and avoids frivolous social outings. One day, he takes the decision to remove other students who have not contributed to the group project at all. One of the people impacted is his senior Jae Young, whose graduation may get impacted by this. Since this can risk his overseas opportunity he vows to take revenge on Sang Woo who continues to ignore his non stop messages and calls. Sang Woo is working on a video gaming app and he desperately needs a designer. He once saw some designer's work at a studio and approaches him. Little does he know that the guy is his archenemy, Jae Young. Jae Young tells San Woo that he will take revenge for what Sang Woo did but he doesn't care. Over the next few days, Jae Young pulls various pranks to disrupt Sang Woo’s daily habits, from stealing his classroom seat to moving in next door. Slowly but surely, Jae Young’s annoying stunts have shaken Sang Woo, who can’t get rid of this nuisance in his life. As the two students continue their ongoing feud, their feelings for each other grow heated and complicated. Jae Young genuinely appreciates his hard work and wants to help in his project, but it is Sang Woo who is completely surprised by his feelings for Jae Young. One night of drinking, they bth confesses their feelings but the logical brain of Sang Woo doesn't allow him to proceed. How Jae Young convinces his potential love with his impossible charm makes the rest of story.
As mentioned above, the show is full of sass, snappy dialogues, funny yet dramatic class and pranks. The episodes are fast paced and so much happens every time the duo are together. Their dynamic was sooo good that I can't remember seeing anything like this in a while now. And oh my god!! That Jae Young is a charmer for sure. Unbelievably handsome, and he knows it, and he uses his charm on almost anyone to get his work done. Its interesting to see how he and Sang Woo are so much opposite teach other in every possible way, but its their conflicts every single time that makes this show charming and engaging. Their arguments are cheeky, their pranks are imaginative, and their reactions are unpredictable. There’s an electrifying buzz when these characters interact. The lengths that Jae Young goes to disrupt Song's daily routine was too good. And yes, the poppy red outfit he wears first few days to annoy him was brilliant. They are both truly the star of the show bringing to life an excellent screenplay which was well thought through. The interactions look genuine and real , which in the hands of bad actors and an incompetent director could have fallen flat. Their scenes get even better, once the sexual and love tension starts building up. The passion, affection and excitement even till the end is all worth waiting for. Though Song Woo character brings his own unique charm and quirk, its Jae Young who is the absolute scene stealer. His wardrobe and styling has also been paid attention to. His cool, edgy aesthetic personality comes to life. If I had to find faults in the show, I can only think that the feelings of romance and love come too suddenly. It would have been nice to see gradual move from being almost enemies to romance, especially since its Sang Woo who makes the first move. A little more history of his character would hav elevated the show even further. There is a scene towards the end where the girl who has been pursuing Sang Woo tell shim that he has changed and the fact that he is sitting there having coffee with her is so different from his old self. So yes, my friend, love indeed changes a person.
The show has everything going for it. Perfect duration, exciting screenplay, laced with some memorable performances and thrilling romance, this was exactly what I needed to watch to cheer me up. Highly recommend this show. Watch it now. (8.5/10)

Sailor Maan said…
I think it's my favourite BL from Korea so far. The pranks part and the characters dynamic at the beginning were just too good. Reactions were not always what you expect. Then boy is Jae Young charming... I can't totally remember the end (maybe because the beginning left such an impact) so a rewatch is on my list now haha
August 25, 2022 at 10:36 AM

Golu said…
It is for sure an amazing series. The duo have off the charts chemistry and the pranks from Jae Young are just too good
August 25, 2022 at 12:27 PM

Miisu said…
Well, this is officially the first Korean BL I've watched. Mainly because of your review :D First I suggested it to my friend and then I thought that well, if I'm going to be sitting at the table for a few hours, making another necklace order, I might as well watch this series as well. Indeed it was a very good laugh at times, surprisingly emotional and not a single deuteragonist (learned a new word, geez :D ) was out of system. A place for every person and every person at their place. The pranks were really clever and so elaborately planned that only a Fabergé egg could be more perfect :D And the romantic scenes 1) turned my computer screen pink and 2) made me say "close the door!" at least twice. That's an indicator that the scenes are well planned and look real. But I must be more careful with these university-related series, otherwise I would end up forgetting the mess of sleepless nights and deadly deadlines and decide to apply for another MA, or worse - a PhD :D
August 25, 2022 at 3:15 PM

Golu said…
I can't believe this is your first Korean BL. There have been a few others that were also a decent watch. Although with my old age. I can never remember the names once I am done watching. I am glad you liked it.
August 26, 2022 at 7:44 AM