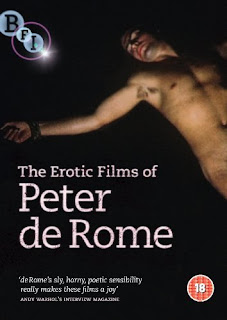 In the late 1960s and early 1970s British-born New Yorker and unsung hero of gay underground filmmaking Peter de Rome produced a number of explicit, painstakingly crafted films each of which took the viewer on an immersive sexual journey. He started by making 8mm erotic films solely for the amusement of his friends. After one of his films was shown at a festival, eight of them were enlarged to 16mm and commercially released in this collection. This collection is an interesting  example of the intersection of artistry and eroticism, in the tradition of Andy Warhol style. This collection also has some extra short films as well.
Hot Pants - A guy dancing and stripping before achieving erection and ejaculation.
Mumbo Jumbo - A fantastic collage of erotic advertising and pornographic snippets overlaid with commercial jingles
Daydreams From a Crosstown Bus - A sweet romantic idyll where a guy images a relationship with a hunky stranger glimpsed out the window when his bus stops at a red light
Green Thoughts - A guy walks around his garden and plants and then jerks off amidst the greenery around him
Double Exposure - In a fancy villa, a young man and a nude youth cruise each other but never touch.
Underground - A hot sex scene filmed aboard an operating New York subway train, but is memorable for its boldness
The Second Coming - A  travelogue followed by a couple of moments of scandalous imagery, as a naked man in a church ejaculates and bleeds from the mouth.
Prometheus - A sado-masochistic short film where a captive is tied and any guys come and repeatedly open up his ass by having sex.
These were the additional extra short films from Peter de Rome in the collection:
Fragments: The Incomplete Films of Peter de Rome - An insightful and revealing new documentary in which Peter de Rome discusses his many incomplete and unfinished films.
Scopo (1966) -  When a young man arrives at an empty apartment, he is unaware that a stranger is watching him.
The Fire Island Kids (1970) - Two men spend a lazy day in each other's company after one rescues the other from drowning
Moulage (1971) - Humour and art collide in this study of erotic body casting.
Brown Study (1979) - An ethnographic study with a difference.
All these short films belong to a different era and thats how you have to see them. Some of these have dialogue, but most do not. The music is atmospheric that it is difficult to believe that it could be heard in a film of gay erotica art film (not pornography). Overall, the collection is is probably most notable as a historical document with glimpses of pre-Stonewall gay soft- and hardcore; but with so many short films which start to feel like repetitive, you do start to lose interest, but still worth glancing through. (5/10)