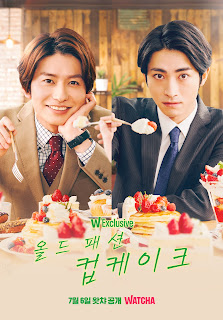 This was such a cute little delightful romance story and that too not set in a university. Set in an office environment, this is a love story of grown up men, who both have feelings for one another , but are too scared to act on it or even say it. The two handsome leads address pertinent issues of aging, work pressure, social norms etc and yet continue to charm us with their charismatic performance. This is one of those mature sophisticated stories, that should have been made long time back. And at 5 episodes of about 25 minute each, it never ever drags and stays on course.
39 year old Nozue is good at his job but prefers his dull and monotonous routine including his work. He is too afraid to take a promotion. He is loved by his team particularly his female colleagues. And then we have the 29 year old Togawa who works directly under Nozue, who is like a role model for him. We see that how Nozue encouraged him after he interviewed for the company and somewhere Togawa feels that led to him getting job, showing him the ropes and inspiring him to continuously improve in various ways. When Togawa realizes that Nozue ha sort of given up on fun and prefers jaded life, Togawa decides to take action. When Nozue says sometime he wish he was like a teenage girl, doing silly things and not worrying about anything, Togawa starts taking his boss weekly to a new dessert store that would force Nozue to break his monotonous routine. WIth constant encouragement the duo continue doing this and they both start falling for one another but neither has the courage to say it. Clearly Togawa is completely smitten by Nozue also doesn't want to use his position of power from an office dynamics. One day finally Togawa confesses his feelings, shocking Nozue. Eventually after an awkward day, Nozue also realizes that he really enjoys and loves Togawa's company and that thanks to him he has found a new set for life, including a new position in work.
First thing, our leading man doesn't look like 39 at all. H barely looks 25 and this is a compliment. We have not seen many shows that dress male mid life crisis head on and how intelligently this has been handles and shown here is amazing. A younger love interest revitalizes the main character and changes his jaded views about aging gracefully. They embark on a self-discovery journey defined by lighthearted experiences, sentimental memories, and tasty desserts. I mean, how can you go wrong with such a setup. Nozue constantly stops himself from doing anything because he thinks he is old and Togawa has to literally force him to do things. Using Cheeky and jokes and youthful energy, the show successfully tries to tackle some important issues and questions. I loved all scenes where every time either of the guy would be tried to meet a girl by colleagues or someone, how the other would get jealous but wouldn't really know how to react and what to do with it. The story and writing is the big winner here. The start of relationship from co workers, to friends to more just grows little by little in every episode. At last, the seductive attraction builds to an epic climax that finishes with sensational emotions. Both the leads do such a good and convincing job of their roles that you feel you are with them watching them. Those two are so freakin cute together and they understand and complete one another and it’s nice to know that they have each other to experience all that life has to offer together moving forward.
There are no surprise elements here and you know what exactly is going to happen, but yet the shows keeps you hooked with its simplicity and charm. Japan is really surprising me of late with some very intelligently created gay content. I would strictly recommend this show. It can easily be binge watched in one sitting. (7.5/10)

Sailor Maan said…
Oooh I was about to recommend you this one given how much I loved it! Can I say after finishing it I went and bought the manga immediatly (which is more or less the same, except they have sex lol). It put a smile on my face the whole time. Especially with the phone episode where they act like teenage girls, that was so cute to watch. Togawa confession was also very mooving. The fact they are middle age guys is such a nice a welcome change. But it was Nozue's slow change from its mid life crisis thanks to Togawa that was the most charming and heartfull asset.
And yes, the actor playing Nozue is 36 in real life and looks 25 and I hate him.
August 4, 2022 at 10:25 AM

Golu said…
This was absolutely a very fulfilling series. And I am surprised that there is actually a series I saw before you recommended it to me. Please continue to bring those recommendations because I have a long list ready but can't decide which one to take up next