Walking With The Ferryman (UK) 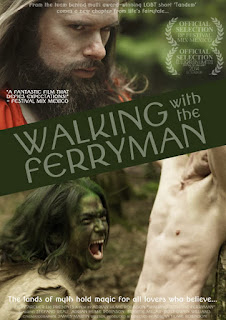 Do not be fooled by an interesting poster. This film made absolutely no sense. In the name of art, sometimes the films get so muddy and convoluted that as an audience you could care less of what really is going on. The synopsis of the film says that the film is an emotional fantasy in which a grieving gay man must open disbelieving eyes to the possibility of supernatural and mythological worlds in order to gain opportunity for reconciliation with a lover lost to apparent suicide. Sounds intriguing, isn't it? Only if the execution was even close.
The film starts with a naked man being bound and tied to a tree when an angel sort of person comes and rescue him. In parallel, we see a guy talking to a shrink, supposedly going through the grief of his partner's death. In both the scenarios there's a whole lot of talking. In one the angel is sort of showing and talking the importance of living and giving up on one's life to the naked stranger, and similarly in the other one, the guy can't seem to understand the reason behind his partner's alleged suicide. Then a psychic comes into picture who tells our guy that his boyfriend is around in spirit and still loves him. There is an intimate sex scene (not sure if its fantasy and reality. But with the help of psychic and the angel sort of person, an odd reconciliation happens between the boyfriends (alive and dead).
There is really nothing to say about this film. It was boring as hell and made no sense. Right from the title to the very amateurish direction, this film help absolutely zero interest from me. The only saving grace was that this film was less than an hour long. Mythical mystical films can go anywhere. This one sadly is pretty bad and completely avoidable. (0.510)