Scusate se Esisto! (Italian) [Do You See Me?] aka [Sorry For Existing!] 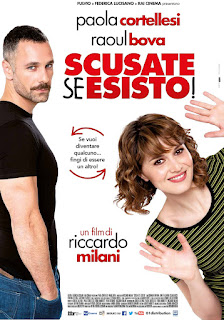 Few years back, there was a time when I used to watch a lot of gay themed Italian films. I feel they have found a way to mix comedy and drama and to send a message. Surely, these movies cannot be taken too seriously, but from an entertainment perspective, they provide a good fun viewing where you can forget your stress for a short while. From a politically correctness point of view, many people may take issues with this film, but I was just happy laughing hard at quote a few places.
Serene Bruno, a woman in 30s has an extremely successful career as an architect in London, but one night when she terribly misses home, she takes the big decision to move back home. The situation at home is not very promising, and Serena must adapt to designing funeral mausoleums for rich imbeciles and working as a waitress in a Rome restaurant managed by the handsome Francesco (who is gay but not out at work). One day she comes across a contest to big for renovation of a old building. She realizes that being a woman she may not get the chance to win it. But she still wants to try it. Francesco helps her in this. He brings her home, tells her that he is gay and they come a good support for each other. When the contest is evaluated, the bosses think that the woman is secretary to a man named 'Bruno Serena' and she plays the pretend along. This is when Serena asks Franceso to help pretend that he is the main architect. He is ready to do this, if in return, Serena will help him come out to his son from a previous marriage. The duo become an instant support for one another.
The film is sort of a comedy of error, focussing mostly on a young woman fighting for her place in the sexist male-dominated profession of Italian architecture. It is a funny, sweet film with an important message about gender inequality. The combination of Serena and Francesco create some really funny scenes. Francesco is undoubtedly hot and adds to the glamour and him pretending to be architecture expert adds good fun to the whole proceedings. On the other hand, Serena is ridiculous – everything she does, and everything she feels is in excess. By building up the stakes like this, it becomes even more tragic and funny when Francesco reveals to Serena that he is gay. The main story is when Serena faces radical sexism at workplace. The film deals with the heavy, on-point subject matter of sexism in the workplace, but in a way that manages to resonate without preaching, and that is the true win of this film. A woman not allowed to do job because of her sex, band her gay best friend who is not allowed to be an openly gay man, the film has drama and humor all rolled into one. Some of my favorite scenes are when Serena's mother and aunt randomly show up, Francesco pretends to be architect and how Serena very unexpectedly finds love at work. I had a great time watching this film with a huge smile on my face. Don't expect this to be a true blue queer film, but I thought I will review it here since the character forms an integral part to the story. (6/10)