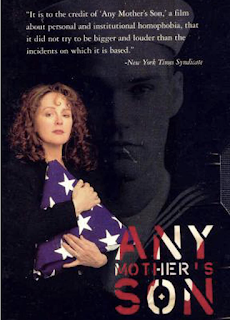 It was only after I finished watching the film that I realized it was based on a true story. Made for Tv in 1997, on paper this film seems like a couple of other made for TV movies where a mother not only has to deal with a child's death but also their own issues when it comes to learning that their son was homosexual. This film is all that and a little more. The film also tries to highlight the power (in this case, the Navy) which the forces once had to cover up what went on with men in uniform.
The year is 1992 and we meet young 22 year old man Allen who is due to return to Navy and how him and his family are going to miss each other but things are different this time. He is brutally beaten to death so bad that his body could be identified only by tattoos, when he was on leave in Japan. The news devastates his mother, Dorothy, which is made worse when she learns from a reporter that Allen was homosexual and he believes that his death was a hate crime down to a couple of homophobic crew mates. But if the Navy has anything to say about it, the entire matter will be swept under the rug. When she reaches her limit of not getting any satisfactory answers from Navy on details on what they are doing with the two officers arrested, she decides to take matters in her own hands. She and the reporter join forces to seek out the truth of what really happened even if the Navy are refusing to be helpful and are trying to cover things up. Their efforts will force the navy to reveal the truth.
The one thing that stands out about this movie is how everything has been handled with dignity and poise. At no point there is any hysteria or drama, even when Dorothy gets cross with the Navy on phone or in person. Everything is handled with restraint and respect just as a subject like this needs to be handled. A mother trying to come to terms with her son's secret and his death is not easy to deal with, especially when she herself has pre conceived notions about homosexuality. Eventually when layers are peeled and she realizes the truth, it is not about the sexuality but about why Navy is trying to cover everything up. You see relatives around her, who are more focused on not letting their image getting shattered rather than being sympathetic to Dorothy. The performances from everyone keep this film together. My one problem is towards the end when we see the history of the guy who killed Allen. I am not sure if thats true or not, but the makers tried to humanize the perpetrator of how he had an abusive childhood and how that be taken into consideration. I really did not like that because that just reiterates my belief even today that whenever there is a White killer, he is touted to have a troubled background just to humanize the person, whereas whenever a person of color is caught, the media is quick to portray the person as evil. And this was one thing That stuck out me. Despite this, I think the film is a decent watch. At places it may feel stretched, but don't forget it came out almost 25 years ago when such made for TV films were very few. (5.5/10)