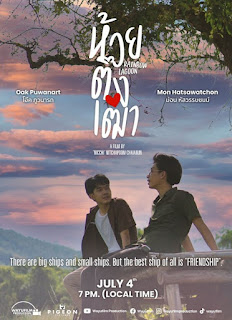 The couple from the series 'Country Boys' is back with this 2 part series of 30 minute each, with a new story that continues to follow the pattern of a simple love story based on real genuine feelings, unpretentious attitude, and honesty. Just like with their other films, the budget and probably the production house had basic minimal budget. A simple story combined with basic budget tries its best to convert the emotions but sadly it fails short of anything memorable.
The film starts with Nueng and Ten fighting for the same girl's attention who ditches them both for a third guy. Supposed to be enemies now. Nueng happens to be sitting in a restaurant owned by Ten's mother. Initially not wanting to serve him, his mother forces him to, as he is now a paying customer. The two start to talking and slowly realize that they may have more in common than they think. They begin to know each other and as they do, they become from very good friends to having feelings for one another and are actually in love. They realize that they are more like each other than unlike.
The two actors continue their streak of pure innocence and love. They don't overact, but I also felt that maybe in process of trying tome as natural as possible, they maybe underplayed their part. I would have liked to learn more and understand what were some of thee things that eventually brought them closer not just as friends but lovers. I mean, I have seen instances of two male friends being very close to one another but strictly as friends, so I struggled a little to understand what really prompted the love between these two people. The mother has little to do but I did like the fact that she was supportive of her son's decisions and love. The setting and story were natural and grounded and that does give it the realistic touch. I am all about supporting upcoming production houses, actors, directors. As a story I wish there was more to it, and I think these two actors have proved thatchy are good. Now they need a good director who can bring out that energy from these two and take them to the next level. (4.5/10)