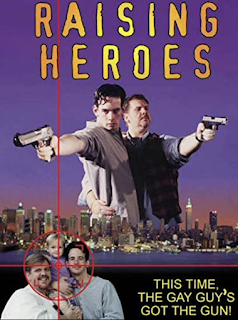 It's after a while that I am actually seeing a thriller/action movie with gay characters in the leading roles, it is also to be said that the fact they are gay is almost incidental. This could have been a straight couple and nothing would have had to change. BU the fact that central plot is around a couple who is gay, makes the film more fun and redeemable. Had the film been done with straight couple, I can't see a reason why anyone would watch it. With the setup above, the film can sometimes get goofy, something that you an't take seriously but you also want to believe in.
John and Paul are a successful gay couple who are about to adopt a child, the son of Paul’s best friend; a victim of cancer. One day when buying milk John witness a brutal mafia murder and escapes home, but is seen by one of the baddies. To not risk their adoption (because the final decision is in two days), he choses not to tell Paul about this. But things change when the mafia tracks him down. A weird game of cat and mouse then starts. An intruder comes home to kill John but in process of fighting gets killed. John has now one more secret to hide and decides to take Paul on a quick getaway to Poconos. But the bad guys find them there too. When John has had enough, he decides to tell Paul and police , but Paul is kidnapped by the mafia in the meantime. John is now extremely angry and decides to take matter in his own hands. John has always avoided confrontation and had no idea he had a mean string guy inside him, who will do anything to save his love. Together him and Paul, make sure all the bad guys are killed and they also finally end up winning the custody of the kid.
The film , though its subject and handling can't be taken seriously, but in some odd way was very endearing and adorable. It was probably because of the very natural and good chemistry that John and Paul shared. They were perfect case of opposites attract. They truly live a happy life full of romance, sometimes on the verge of parody, but they really care for each other. They had great chemistry and their natural interaction felt as if you were watching a real life couple. Both of them were great, although clearly film was more form John's point of view and he had the more substantial role. It didn't hurt that he is also extremely handsome and good looking. With its crisp length and plot, it stays entertaining although the script can use some serious improvements. The makers tried to make something different, but didn't really succeed much to create an overall impact. I enjoyed the breezy tone of it, the humour was good, but the action could have been better. The child actor was amazingly great. The first scene when the social worker tries to take the kid away but he really wants to stay back; his cries broke my heart. I wanted to give the kid a huge hug. He was that god in the limited scenes he was in.
Made on probably a low budget, the film scores because homosexuality is treated in a refreshingly candid, nonjudgmental, matter-of-fact manner. The gay angle is organically woven and is never in your face. But a lazy screenplay and hard to believe climax puts a slight damper on the overall experience. Despite all this, I still quite enjoyed this movie on a lazy summer evening and would actually recommend it to watch. Keep your mind open to watch a not so serious happily gay ever after kinda film with some action/mafia mixed in. (6/10)

Golu said…
That is funny indeed that we saw the film around same time. 'Bear City's is definitely one of my favorites and trust me I enjoy the couple of a plays size man with a 6 pack guy just like in 'Modern Family' as well
August 10, 2022 at 9:28 AM