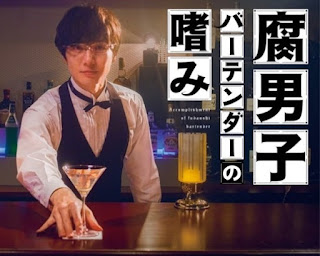 This 2 part mini series of about 22 minutes each was an extremely easy and fun watch. A slice of life comedy, this show reminded me of the Man who Defies the BL world for its over the top, yet very funny, humor. With his overactive imagination, the lead actor makes up quite bit of outlandish scenarios that can title your funny bone.
The plot is simple. Hibiki works as a bartender and is a secretly obsessed fundashi (boys who enjoy romantic or sexual relationship between two men), who likes to draw BL, watch anime etc. But at work he pretends to be your regular run-of-the mill guy. While working, he loves to day dream about real life people in front of him in various BL scenarios. When the first two customers arrive, he has funny day dreams about them. Hibiki’s overactive imagination often misconstrues their innocuous interactions as romantic connections. He gets overexcited about his fantasies, often lost in his own world. This continues when his older boss' male friend comes to meet him. When a young bartender joins at work, he even dreams of shipping them with two separate customers, till he feels maybe those two are better with each other.
The humor in this funny outlandish comedy comes mostly from the lead man's hysterical reactions to his own imaginations. He has this relentless enthusiasm and almost every scene is silly and energetic. The jokes may not be the best but the lead's reactions and excitement cover up for everything. He captures the suaveness of a bartender and combines it with the giddiness of a fudanshi. The actor is just too good. The other actors playing his colleague are decent in their. part but the focus is so much on Hibiki and rightly so, that you barely have even time to notice anyone else. Don't expect too much of actual romance happening here, since all the scenarios actually happen in Hibiki's imagination. Despite no plot development, character growth, or meaningful progress; the show still worked as a collective of gag humour, mainly because of the amazing acting by the lead. An interesting thing was also that all his BL scenarios were normally based on the drinks that he would make and the story behind that would also add to the humor.
Those who love silly comedies may respond well to the offbeat humour in Fudanshi Bartender. It parodies BL tropes cheekily with outrageous scenarios, wacky characters, and over-the-top fantasies. I quiet enjoyed it for what it is and if you wanna have a good laugh and watch something silly, I would definitely recommend this. (6.5/10)

Sailor Maan said…
This one was so silly and had me laugh a lot! Just don't expect any sensitive plot. It definitely has vibes of A man who defies the BL world. The actor is fantastic, switching attitude from cool and handsome bartender to crazy OTT fudanshi. Some scenes were hilarious. I'm just happy it was just 2 short episodes, I feel more would have been too much.
PS : do you think the owner can actually see something with his hair???