The Love That Dare Not Speak Its Name (Cantonese Mini-Series) 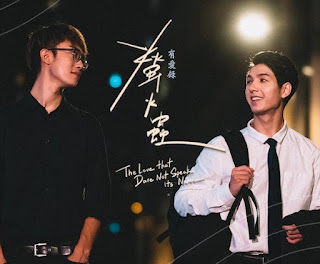 This short six-episode series chronicles the relationship between the main characters, from their student days to their workplace experiences. When I say short, they are really short like 2-6 minutes each. So I was in two minds about posting this as a separate post, but then why not? I haven't seen a slice of life drama from Hong Kong in a while and this was a perfect addition. Stories of silent love and unspoken feelings are very few and this one in particular, uses silence and minimal words and brings the impact very effectively.
We never get to know the names but our two leads are known as 'The cafe Owner' and 'The Boy'. The two boys met years ago in university when they ended up sharing the same flat. Over that period, they became really close friends and shared this easy going comfort feeling with one another. The Cafe owner doesn't get good marks in university so his friend encourages his decision to open a cafe. The Boy, who now has a high profile job but a stressful one, visits the cafe everyday. The Café Owner tries his best to cheer up his friend, listening to his problems and offering support. The two have remained platonic friends over the years, but one day the Cafe Owner confesses his true feelings for The Boy. There is hesitancy on where this new dynamic will lead to and what will happen to the beautiful friendship. The last episode very beautifully summarizes that for us.
Apparently this series has been made by a small group of passionate BL fans who run a manga store. It's their passion project and I have to say what a fantastic debut. The events in the show feel very authentic, the feelings genuine and clearly the director knows what he/she wants from the story. The story and the characters are down the earth and the viewers get an opportunity to feel intimate and cozy and be a part of these 2 lovely people and enjoy the rapport they share as roommate, as friends and eventually as lovers. If I had to critique, I am sure I will be joining thousands of other fans who thought that the episodes were way too short. I mean, how can you invest in anything in just a 2 min episode. They might as well have released this as a short film and that would have made a stronger impact. But hey, like I said, Kudos to people who were so passionate about the whole BL genre that they gave it a try. Its not easy to tell a story by more visuals, minimal dialogues and still give the impact.
Overall, this is a sincere attempt that has impressed me a lot and I personally would be rooting for this group and will look forward to a sequel of sorts with hopefully longer episodes. In the current scenario, at a total of barely twenty minutes long, the mild love story end too quick to feel satisfied and fulfilled. Nevertheless it does make sure to leave an impression. (7/10)

Sailor Maan said…
Is it really made by fans?! Wow I'm impressed. In such a short running they really captured the evolution of the relationship in a beautiful way. I just think it sometimes lack emotions. But that also gives it a special feel. And the tea/coffee metaphor was a bit too quick to explain the kiss in the end, I had to watch it again to eventually understand... (and I'm still not that sure, but then it's only my fault for being slow lol)
August 29, 2022 at 8:36 AM

Golu said…
Noah its not your fault. It is just how t he show is.
And yes, apparently the show is made by fans of a BL book club and that is why the show was suddenly so impressive for me. Had it been someone else, Id probably have found multiple faults in it.
August 29, 2022 at 11:17 AM