Plus & Minus (Taiwanese Series) 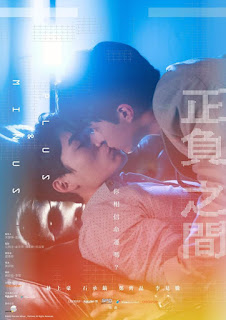 Plus and Minus is yet another addition to the growing number of BL shows that keep coming our way. This story focuses on the love that grows between two childhood friends, who are now co-workers. The leads share good chemistry but to be honest, this show doesn't really provide anything new to the table that we have not seen umpteen number of times in many other shows. Friends turned lovers turn temporary break-up and finally back together. The writing is clunky but two charming leads make it ok. The show is 12 episodes of about 30 minutes each with a special episode that shows us how the leads met up in school.
Fu Li Gong and Ze Shou have been childhood friends who now work together in a law firm, specializing in divorce cases. Fu Li Gong harbors a secret crush on his friend for many years. They once shared a kiss during high school, but a drunken Ze Shou doesn’t remember the incident. He is also cynical about love since his mother abandoned his father and goes for blind dates only at his father's insistence. Eventually one night, Fu Li Gong has enough and he confesses his feelings to Ze Shou. Initially taken aback and shocked, he slowly gives into the idea and the two get together, but when Ze Shou's father finds out, he is disappointed. Since Fu Li is a nice guy and doesn't want father-son relationship to break, he backs out but eventually everyone comes together and the duo get married. There is also a parallel love story of a laundromat owner and the famous and good looking brother of a bar owner and the two business owners share common roof. The laundromat owner is a divorce with a young child. Somehow the good looking brother finds the brooding quiet quality of the laundromat owner charming and we also do see a budding relationship and love between them. In fact they almost have same time devoted to them as the main couple, so I would say this is easily a show about love story of two couples. One who have been closest friends forever and the other who come together despite how diametrically opposite they are to one another.
The show is 100% BL and has no scope of no straight love. It presents the romance attractively with pretty visuals, modern styling, and a lovely cast. As an actor Ze Show brings in the vivaciousness and the ease and cheerfulness that character like this demands. Fu Li Gong on the other hand is silent, broody and a sensitive individual. They both look their parts and share a good chemistry but despite all this, the show just failed to immerse me in their feelings and emotions for one another somehow. I am not saying that it seems fake or anything. Th love was genuine and the performances are honest, but I kept hoping and looking for something new. After all, it's a brand new show form the current year, but nothing really happens. The makers have tried their best to keep us hooked through seduction, flirtations and even generous amounts of kissing shots but personally, for me the characters were too plain and just not interesting enough for me to invest in them. And I felt the same for the other couple too. Things just happened too conveniently for them. I may regret it saying, but I missed drama and conflict in this show. The whole episode of Fu Li Gong suddenly breaking up for no reason (of course, for father's sake); that whole scenario just didn't work for me. It was a classic case of lazy writing. In my opinion, the show is just about average with a good budding romantic story but the simplicity and playfulness of it prevents it from rising above the average status. The show would have been a hit for me few years back, but these days I look for more substance. (5.5/10)

Sailor Maan said…
I wasn't sure you would like it since it defenitely has the same feelings as Be loved in house I do. That I already loved. And that you just barely liked. At least we stay true to ourselves lmao!
I'm just too much in love with the main couple. Ze Shou's energy is wonderfull (I have a weak spot for characters like that). But most of all, it's Fu Li Gong look when it looks at Ze Shou that honestly turned me upside down. Felt you could read the world of his thoughts and feelings in his eyes. Having Cameos of characters from Be loved in house ended my infatuation to this series.
I have to admit it's cliche, and the "break up" part was totally stupid and unnecessary, kindda messing up the ending. Yet I can't explain why this series left me so lighthearted and happy . Sometimes we just don't need a reason do we?
Btw the actors announced they were officialy a couple, I'll root for them lol.
There's a special episode too, which doesn't add much imo, just more fluff I'd happily take anyway XD

Golu said…
I agree, sometimes we don't need a reason at all to like anything. There is often that just one thing that could touch you in ways that you didn't know of. Although personally I think, such things happen, when a certain element of a movie or show reminds you of something that has happened with you and suddenly it gets too personal.

Interesting news on the couple officially being a couple. I always assumed that all these actors in these BL shows are straight and they play along just for their female fan following.

The special episode was just new but it did give an insight a little more on what their school life was like.
August 25, 2022 at 12:32 PM

Sailor Maan said…
Can't agree more, we all see movies through our own experience and are touched differently. That's also why I love reading your reviews so much :)
I also believe most BL actors are straight. If you want the teenage girls to support and fall for the actors, they have to be straight at some point lol. But they always try to make the leads relationship blurry in real life (or even fake) so people root for them more, teasing their chemistry comes from "something more". Kindda like Lady gaga and Bradley Cooper in a star is born but I think BL industry is on another level.
August 26, 2022 at 9:43 AM

Golu said…
I am forgetting the name of the show now, but in of the BL series they even touched upon this fact that how they prefer to have a leading couple of a show always be together to give a public perception that they are really together.
But IMO, in today's day and age, who cares !! We all are mature enough to know its drama and acting.
August 26, 2022 at 11:42 AM