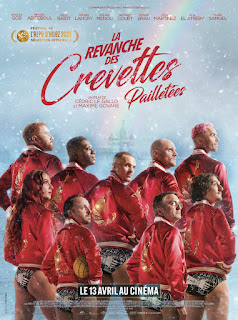 The original Shiny Shrimps movie was so much fun. So, ever since I had heard about this sequel, you can only imagine how much I was looking forward to meeting the crazy water polo team members again and see what they are unto next. This adventure continues two years after the death of jean in the original film. Does the film meet its expectations, let's analyze later after the summary.
Its time for gay games in Tokyo and coach Mathias ha snow brought in a new person Seilme, whom he believes is gay along with Shiny Shrimps. The problem is that Selime has never comes out and is horrified to know that he is actually going for gay games and the team is equally aghast that he may not be gay. Because of a snafu, their connection in Russia is a day later ad they are forced to spend a night and a day in remote Russia. Despite repeated warnings about homophobia in Russia, a couple of team members can't help themselves and want to meet local gays but are horrified to find that they have been tricked. 5 of them get sent to a gay conversion camp in Russia, where you can imagine that homophobia is at another level. How the coach and the senior member of the team try to get them out of this camp while on ground in Russia along with the help of one of the ex-team members forms the crux of the rest of the story.
This sequel has tried to cover a LOT of themes in this film. Topics like grief, love, sexuality, relationships, secrets, repression, oppression, activism and religion are tackled head on. Using different characters we see issues like straight-isa man struggling with sexuality to come out, middle age gay men, trans pope and trans phobia, internal homophobia within the community etc. Although the overall tone of the film, as expected, is light and funny, I have to say that for about 30 or so minutes in the middle of the film I started to get bored. I know! I know!! But during the whole Russia sequence in the beginning when the guys go to meet another guy for. Hook up, then Fred wanting to go to a gay club and events there after in the prison and conversion camp, personally for me were not that interesting. Actually this is where the film actually takes a slightly serious tone and addresses some very very important issues. Certain dialogues are good, but I missed the comedy at this time. The film thankfully picks up again in last 30 minutes when the actual rescue happens and the sequences there evoke laughter and emotion and fun and the film finally comes in its own. The efforts from France and the men on the ground do everything they can to show that they are really a team and its their team spirit, despite the differences that keep them together. Sure, you have to keep some belief on the side and logic on how things eventually work out but thats the fun in comedy films
All the actors do a good job and leave a mark in their roles, but its Selim who stands out thanks to a well written part. But everyone else, including coach, Trans Fred and others do well in what's expected of them. No one outshines anyone else and that shows how well the screenplay was written. Now, if the film had not dipped down in the middle, I would have said that its as good , if not better, than its original but sadly the film falls a bit short on expectations. Despite this, its definitely worth watching, if nothing else then for the beautiful son numbers at the beginning and the end. The end song lyrics are just so beautiful and they beautifully fit well to give a befitting ending to the story. (6.5/10)

Sailor Maan said…
Began with a choregraphy with the guys disguised as sailor moon, so of course they won me over since the start lol. Like you I was surprised of the serious tone it increasingly got into. Fells like I wasn't watching the same movie. Yet I have to say some topics did touch me (and once again made me feel grafetul I'm leaving in western countries...). The worst part was probably the character of Fred who really got on my nerves.
Little detail: part of the movie was shot in Ukraine. And when the movie was released in France, the war in Ukraine had just started. Which definitely gave it a undescriptible feeling when you know a part of the cast turned into soldiers.
August 25, 2022 at 10:49 AM

Golu said…
I did read that the film was shot in Ukraine. So yeah, I can imagine the bitterwsweet feeling with the war now in full swing.
Both the big song dance numbers at the beginning and end were definitely amazing and a good start and end to the film. It got have been better had they kept it light

And I agree. Fred was indeed getting on my nerves. She was literally forcing herself on everyone and didn't care much about anyone.
August 25, 2022 at 12:29 PM