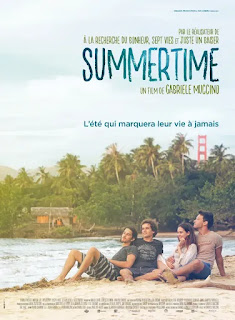 This is a feel good road movie about two mismatched Roman teenagers spending a summer in US. To be honest , from a story perspective there really isn't much that's happening here. The film is about friendship, coming of age of two teenagers who end up spending their summer with a gay couple and unexpected friendships develop.
Marco is about to graduate school when he gets 3000 Euros for accident compensation. At his friend's suggestion, he decides to take off to California to stay with someone whom his friend recommended. To his horror, his friend also made the same promise promise to Maria, a good girl from school, whom he can't stand. Marco and Maria are to stay with the gay couple Matt and Paul in San Francisco for a couple of days till they make their next move. Maria makes her displeasure about them being gay, but the couple takes it ok. Over the period of time, we hear the story of how Paul and Matt got together and how Matt was bisexual. Also Paul is unhappy in his job and finds common interest with Marco in horse riding. Eventually the four become extremely close and the gay couple becomes their guide/caretakers for their California journey and before you know they have been together for almost 3 weeks. Most of the film is focussed on showing how their friendship evolves over a period of time. Matt becomes close to Maria and Paul becomes close to Marco, but only in friendship. Before the duo decide to spend a few days in New York , The couple surprises them by taking them to an all expense paid trip to Cuba strengthening their friendship further. Marco, in the meantime has started to fall for Maria big time but she is crushing on Matt knowing very well that he is gay. When Marco and Maria are by themselves in New York, it is nothing like their time in SF and after three days they both return to Rome to go back to their lives. Marco is still obsessed with Maria but she doesn't care about him.
The film is essentially told from Marco's point of view. The gay couple is more of an accessory to help the uptight Maia to tap into her inner fun persona, which eventually leads to Marco pining for her. And then on encouragement of Marco, Paul even quits his high paying finance job to follow his passion o teaching horse riding. I have so many open questions about this film, if I really started looking for logic : How do these 2 very successful gay men make so much money so quick in SF? How come they have zero friends? Why would they clear their schedule and support two Italian teenagers and open up their home and food? How did they meet the common friend of Marco through whom they met. Why do we never see them again? The gay backstory is very touching and I am not sure if there was a point, but I feel like the Italian director who made this film either doesn't understand gay relationships or he was more focussed on the teenage angle, otherwise why would he have two settled men behave like teenagers. Was it to cover for the lost time of them living in closet? I don't know. But the film essentially follows the four people for most of the film, showing their camaraderie and them having an amazing time in SF and then in Cuba and how in their own way, each of them comes out of their shell and decide to follow their heart. Sadly, the film doesn't come across as heartfelt. Surely I wasn't bored or anything while watching the film since the four people were all good looking, acted well and shared excellent chemistry , but my brain is stopping me from justifying the reason for the film. Its charming but is also childish at the same time. It is literally a summer movie that you will watch, probably shrug because you neither liked it nor hated it and would probably very easily forget it. (5/10)