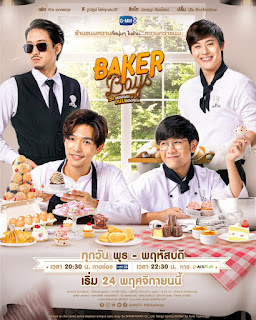 This quirky little 12 episode series, each of 45 minutes, was a nice fun subject waiting to be explored. It focuses on 4 main characters who work in a bakery, including an openly gay main pastry chef. This combined with an ongoing murder mystery and with some backstory of each of these characters bring in new stories every day and some fun, comical and delightful surprises. However, despite the decent start, the makers have tried to cramp in way too many stories and sub plots in one series and after a while you start to loose interest after some repetition. People need to learn from the Taiwan/Japanese counter parts on how to stay focused on main stories for such shows.
Punn, a 30 year old man comes form a wealthy family decides to open up a bakery in hopes to meet the right girl at work. Due to a childhood trauma where he was kidnapped as a kid and forced to eat desserts, he now throws up every time he eats cake. He hires Weir, a talented pasty chef who has just moved from Paris. Weir is openly gay and has a reputation for being flirty and seducing men including at work. In fact Weird used to like Punk when they were together high school. And even now, Weir doesn't live any single opportunity to flirt with Punn. Together , next they hire Krating, a boxer, who an no longer pursue his dreaming because of a life threatening injury. He joins as an apprentice. Krating idolizes Weir, but he has a rocky relationship with Punn and teases him a lot. And Finally, we have Pooh, a childhood friend of Punn and also his bodyguard. Pooh is comically inept in almost everything he does. Nonetheless, he is loyal, devoted, and protective of his friend Punn. While the foursome are trying to attract customers for their bakery and Mae it work, kids around are being kidnapped and some murdered. Enter a girl named Mine, who works with her parents as investigative journalist, who believes the recent murder might be connected to the bakery. She begins her investigation to find the killer’s identity. The episodes focus on the quirks and relationships of these 4 boys and them navigating their life and getting used to one another while also supporting One in her investigation.
The series started off really well actually. Punn's charm is something that immediately caught my attention and I was totally into him and his smile and his charm, but somewhere around episode 3, things started going south. A random curve ball was thrown in every episode for obviously no reason at all. Right from random appearance of Weir's ex boyfriend and him stalking Weir to an extent of annoyance and harassment, to all the baking contests and finally anything to d with One and her so called investigation. That character was so poorly written and equally badly executed, that some of the other amateurish shows would look much better in front of that. The good thing about the show is the charm that the four men exude. Weir's constantly flirtatious behavior with Punn, Krating teasing and calling Punn uncle was also hilarious. I would laugh so hard every time Krating would bust his balls. He is definitely IMO the scene stealer of this show and gets some really cool dialogues too. Clearly there was a good chemistry here and it got better when they all move in together. But as I said before, other than this, all the other random silliness prevents this show from going one level up. Some instances are stupid and they take away all the fun from the show. Like Weird having a phobia for women. That whole story was unbelievably bad and I couldn't believe what I was seeing when the reason was revealed. It was a wtf moment for me. If not for the extremely charming cast of the show, this show would hav been a huge failure. Their bubbly enthusiasm translates on screen, adding positive vibes and zesty energy to each scene.
This is not a BL series per say but has a substantial time spent on Weir and his ex, who resurfaces and also constant flirting between Weir for Punn. Thankfully, Punn suddenly doesn't become gay and accept Weir's proposals and I was quite worried about that. Watch the show only for the charming cast and their chemistry, but other than that it is easily skippable or keep your expectations very low. (4/10)