The Moment: I Need You (Thai Mini-Series) 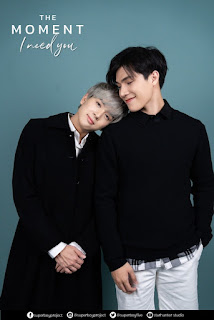 This is a 4 part mini series with average 10-14 minutes duration. It goes at a very fast paced which is a good thing. The primary story tries to focus on the fact that the person you thought you need is actually a person in the past but rather another person that make you truly smile when it matters the most. The story is primarily of two people here.
Mok, a veterinarian arrives to a hotel for vacation. At the hotel's bar at night he gets too drunk making a ruckus. The super sweet bartender Bay, escorts Mok back to his room where in drunken state Tok begs Bay to stay back for the night with him. It turns out that Mok has just had. Breakup with his girlfriend, who for whatever reason is in the same hotel with a new guy. Bay makes a deal that he will make Tok smile at least 10 times. He takes him to his favorite night spot and become friends. Meanwhile, feeling refreshed from Bay's kindness and love, he clears up things with his ex, but that leads to a misunderstanding with Bay who thins that Tok is back with his girlfriend. To make matters worse, the hotels owner Boston reminds Bay that guests will come and go, so he needs to tae care. Anyway Bay and Tok become very close , even romantically but its time soon for Tok to leave promising Bay and telling him that he needs him. The ending is a bit ambiguous though.
The series doesn't focus on the love story or anything but relies more on the seat moments between our two leads. The focus is on the characters and how they are portraying what they are feeling in certain moments. Even though the characters and their action do feel a bit amateurish at many places, the actor splaying them do share a very good chemistry and save the series. We are never clearly told if Tok is straight or gay, is h using Bay's niceness for his own good or maybe he started to feel for him? The ending makes me think he has, but its never evident. But to be fair, the two guys have only known each other for two or three days. So simply staying in touch is all that we can really expect as they hardly know each other. Making them a couple just after this short meeting would be too unrealistic. The budding romance between them is ok, but overall the mini series is too short to invest into any character or feel for them. It is simply a feel good kind of viewing which can be good, when watching a heavy long series gets too much and you need a break. Strictly ok. (5/10)

Sailor Maan said…
Oh boy, it took me a while when reading your review to realize that I had actually seen this series. Must be the sign it wasn't that memorable... I only went to watch it because I saw the leads in another BL (Gen Y, horrible, don't go there, especially season 2) and liked them and their chemistry. Which is still happening here so not complaining, I had what I came for :p
August 26, 2022 at 9:13 AM