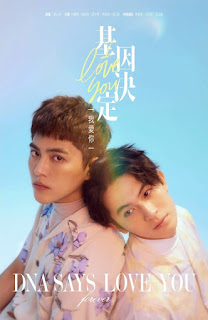 Even though you can see it coming right from the very first episode, There is still a fascinating story embedded in this Taiwanese show. This show taps into everybody’s insecurities in the LGBT community, the part of ourselves that might not comprehend why we’re born differently. The show goes one step deeper and also address some born chromosomal disorders which heighten the anxiety of self acceptance to another level. At 12 episodes of about 25-30 minutes, its a good watch without any unnecessary fillers.
Le Chien works as a part time chef along with his childhood friend, a girl named Yu He whose brother knows the cafe. This duo had another friend Wen Wen, who moved away form the town when they were all very little. Wen Wen and Le Chien were almost in love with one another as kids. Meanwhile Yu He has always harbored a secret crush on Le. Le along with another one of his close friend Ching Lung, who has a boyfriend of 4 years and they share a very warm and lovely gay relationship despite the struggles they had to face. When a new customer Amber arrives in cafe, who sees Le working on his video and they both instantly strike a friendship since Amber is a photographer himself. Amber slowly becomes a very integral part of this circle, but he is hiding a secret. We see some misunderstandings between Ching Lung and his boyfriend which get clarified, and they are together. Meanwhile, Le feels strange unexplicable affinity to Amber. Eventually Yu He finds out the secret about Amber. I won't reveal , but you can probably imagine what it is. When we know the secret, which ultimately gets revealed to Le Chien as well, the last few episodes are about the challenges faced by Amber growing up, why he came back, and are Le and him meant to be together despite Le thinking of himself as alway a straight guy.
The chromosomal disorder that can challenge an ordinary person's understanding of gender is a subject that is never tackled ever in a BL show. So the groundbreaking narrative is psychologically complex. Cis gender people will probably never be able to fully empathize with such people. The confusion and the anxiety that one could deal with their identity is not easy and we see that pain in Amber's eyes. I was not expecting the secret would be that. The first half of the show feels like a regular love story with a good focus, thankfully, being given to Ching Lung and his boyfriend, which gives you a cozy comfort feeling of a regular gay relationship going through its ups and downs. It was very heart warming, relatable and necessary in the larger scheme of things because it also showed Le's openness about acceptance. But as the show progresses, Amber's story becomes the center along with his equation with Le Chein. Amber’s predicament is engrossing and sympathetic, bound to make an impression. And in the similar vein, the way the information is handled by both Le Chien and Yu He was incredible. I can't imagine doing that in a better way.
The acting and the director is top notch. Le Chien plays the silly and perky charter very well. The glow in his eyes and his carefree attitude is very contagious. In contrast Amber's reserved nature when takes the center stage, it outshines everyone. I also really liked how Yu He wasn't suddenly sidelined and there was a proper closure to her equation and crush on Le. The one problem I have is Le and Amber as a couple. Even though as individuals it all made sense, somewhere somehow their bond stops developing after a certain point, so they don’t feel like a fully fleshed-out couple. Also the whole thing about the hidden temple felt a bit over stretched and was a fail according to me. Despite my complain, I never lost interest in the show. As this point I have to mention the amazing work done by the three child actors. They are barely there for 2-3 minutes in the beginning of every episode, but the amazing chemistry they share contributes a a lot to understanding these characters as adults. The scene where Amber eats the pie made by Le's mom literally brought tears to my eyes. Also a shoutout needs to be given to the cinematography of the show. The series is packed with beautiful visuals, filmed at professional standards. Many scenes have unique camera composition, and stylized post-production work. An expert example is when the child and adult versions of Le Chien and Amber stand face-to-face and the camera goes around them. Also the scene when Amber is crying and walking along a long rainbow path after Le Chien confronts him,  representing the lengthy and solitary journey many LGBTQI+ individuals face.
This show deserves to be watched, despite its hiccups. It is a n interesting mix of gentle love story with a social stigma and information that has never been touched upon before. The last few episodes had iffy parts like Amber’s car accident, and Le Chien’s coming-out saga, slowed down the show a bit towards the end which util now was going well. But at its peak, the series delivers complex and compelling drama that resonates poignantly and I will strongly advise to watch this. (8/10)

Sailor Maan said…
I loved it too. I have to admit it totally took me off guard, in a good way. I do have some complaints about some unnecessary things like the boyfriends misunderstading (but they show a loving LTR couple so I won't complain) or the magic temple. But as a whole it was great. Amber character outshines everything else, and I feel his secret was very well treated. + the actors do a great job conveying the emotions and some cinematic sceneries are definitely high quality.
Thank you for your review as usual, made me want to re watch it haha
There is another taiwanese series I can recommend : Plus and Minus. I has the same feels as Be loved in house (which if I remember right you weren't the biggest fan but I think this one is better for the most part).
August 10, 2022 at 8:32 AM

Golu said…
Plus & Minus: Noted
Back to this show, I feel its not been talked abut as much as some of the other show sin recent past have been. It was mature, directed and acted well and did give us an interesting new perspective
August 10, 2022 at 9:33 AM

Anonymous said…
Experience the joy of shooting reside cube and interacting with the Dealer while putting bets at your individual betting terminal. We like to keep things fresh and full of cash and prizes, so we’re always cooking up exciting ways that you just can} win massive. Take advantage of mychoice® promotions and other offers at Cactus Petes Resort Casino and you can win cash, wonderful prizes, Free SlotPlay® and more! Check back often, so you by no means miss one tasty 점보카지노 bite of the action. Every Thursday Table Games is rocking with the Table Games Party Pit!
December 2, 2022 at 9:46 AM