Une Histoire Sans Importance (French) [A History of No Importance] 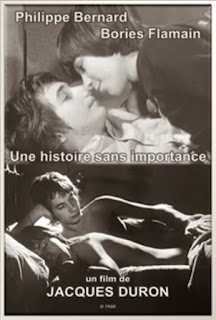 This short 45 min film which came back in 1980, must have been something of a game changer. I am guessing that this 'coming of age' genre barely existed then. An interesting love and power dynamics between two school lads leading to awakened and heightened sexual curiosity, this film can get confusing at times, but is a very interesting case study.
In the first interaction we meet Philippe and Claude and it seems they have some previous connection. Claude is the younger of the two boys. Claude wants Phillipe to be near him in the train in literal sense but latter is a bit of a tease, goes and sits on another seat and a smile on his face watching Claude sleep. Soon, their friendship starts to develop where Philippe becomes sort of a mentor to Claude. The next day, it is Philippe who is saving a seat for Claude. They spend a lot of time together and one night in bed, Claude brings topic of masturbation and asks Philippe to teach him. He refuses and we know they are both playing a game. They tussle, rub their noses and thats it. Claude is curious but there's something more serious within Philippe. One night of sleepover, it happens when Philippe initiates sexual advance and Claude only supports him to finish it off. But things start to change soon. Claude starts to avoid Philippe and talks of girls affecting Philippe who clearly now has very strong feelings for Claude. In the end Claude prefers company of girls, leaving behind Philippe as a seeming insignificant part of his history, “a history,” as Philippe describes it “without importance.”
We have seen a few films with young adults temporarily suffering the end of first love, but because of their youth quickly coming to terms with it, managing to realize that they have long lives before them in which to find someone else. Making the premise between two young boys makes the whole thing very interesting. Its funny, how initially its Claude who initiates all conversations and sexual advances towards Philippe because he is curious and knows Philippe is older and probably experienced, but when the curiosity waivers off, Claude moves on so easily, while Philippe is left completely heartbroken, not only growing obsessed with his Claude, unable to eat or sleep, having imaginary conversations with him, and describing the former 14 or 15 year old boy as an “asshole,” “egoist,” and “whore,” but stalking him, hiding in the shadows as Claude’s passes by with his girl, and telephoning him only to quickly hang up. Philippe’s mother fears for his well-being, as does his audience. In the last scene, which I am not sure was real or imaginary, we see Claude sitting in from of his mirror re-adjusting his shirt before pocketing a large sum of money in his pocket saying “I hope you got your money’s worth,” as the camera pans left to show Philippe looking out of the room through the slants of a blind. It is a bit of a sad moment but oh man, this film was sooooo good. Something about failed love, heartbreak, two very compelling leads and overall a remarkable beauty of this film told mostly by fragmented scenes between two individuals is something I would highly recommend everyone to watch. (8/10)