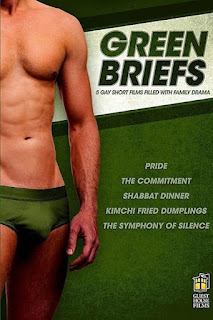 A collection of gay family dramas. After a long time, I have to say , I saw a collection that was good. I had seen a couple of movies before as well. But watching these as a unit somehow connected with me more. I guess this series is a continuation where many years ago, I saw the collections of Boys Briefs, Blue Briefs and Black Briefs. I guess this as always in my collection but I somehow missed it.

PRIDE - On the morning of his annual gay pride party, Stephen is forced to take in his homophobic father who had disowned him over 20 years ago. Now suffering from Alzheimer's dementia, the father gets a crash course in all things gay from Stephen's eclectic mix of friends. Seeds of their turbulent relationship come to light as does hope that the two can move past their fears, accept and forgive one another.

THE COMMITMENT - Robert and Ethan are an interracial gay couple fulfilling their dream of adopting a newborn baby. After they meet the expectant Asian birthmother, however, they receive a surprise that threatens their own relationship.

SHABBAT DINNER - Shabbat Dinner is boring as usual for William Shore. His mother has invited two crazy hippies and their son and is doing her best to show off, his father is drunk and berating their oddball guests, and he doesn't have much in common with their son Virgo. That is, until Virgo tells him that he has just come out as gay. In William's room, the boys speak directly to each other about themselves, while just a few feet away the adults discuss trivialities. In telling the coming out story of two boys, it addresses universal issues of finding acceptance and truth as a teenager.

KIMCHI FRIED DUMPLINGS - When Carl comes home with his new boyfriend for Christmas after years of being away from his family, he faces the resentment of his younger gay brother Adam, who has been left to care for their aging parents during Carl's absence. A very touching film about family and love and balance.

THE SYMPHONY OF SILENCE - 17 year-old writer Zach struggles to survive in the "dog eat dog" world of high school where he is tormented by bullies. There is no chance of finding comfort in a bully-free home environment as one of the bullies happens to be his 18 year-old brother, Sean. An incident involving another student sets into motion a confrontation between the brothers that is nothing short of heartbreaking.
Overall, a great collection of stories and highly recommended collection. (7/10)