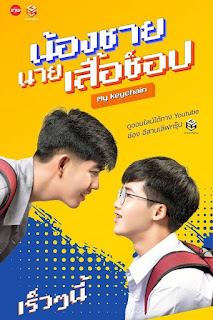 This 4 part mini-series lasting about 45 minutes isa very amateurish attempt at making a BL drama. The story hardly exists, which is made worse by a very cheesy high school romance. I almost felt guilt to watch these younger than high school looking boys, in their contrived romance. Even though, ,the probable target audience of this show is pre teens, the plot of full of flaws, and I can't see why anyone would like this.
Tin is a young ordinary student walking home from school. One day, he encounters Na, a student from another school, who bumps into Tin, because of which the keychains of their bags get tangled together. Reluctantly, Na forfeited his bag to the stranger he had just met. They make arrangements to meet up again once their schoolbags are separated. In their next meeting, Nan accidentally grabs the wrong bag. This mistake gives the characters another opportunity to communicate and interact. Na seems friendly during their exchanges, even though Tin is reluctant to get closer to him. As they chat after school, Tin almost falls down the stairs out of carelessness. Na tries rescuing him, but he ends up falling down and hurting himself in the process. He has an injured leg as a result. Tin feels terrible about what happened to Na. He starts paying more attention and taking care of the injured student. As they spend time together, feelings develop between the pair. However, their budding relationship faces interference from other friends, classmates, and bullies.
The adolescent romance between two leads feels very awkward, which, I mean, you would expect of these silly teenagers with their iffy interactions. The main characters have a barebones relationship and hardly know each other in a meaningful capacity. The leads are strictly ok and do what they are asked of but sometimes their expressions don't match the plot line and that is a very glaring fault of the director. This mini series has absolutely zero memorable scene and you can't help but get confused and frustrated by this ridiculous storyline and even a weirder title. Just ignore. (1/10)