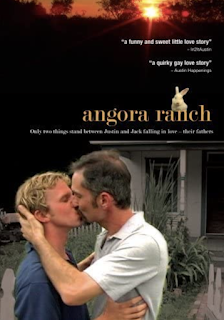 This film was an interesting indie film probably made on a shoe string budget. A sweet, heartfelt, movie about love that transcends age, stereotypes and meddlesome family, its heart is in the right place, trying to show us a warm breezy and cozy love story between two individuals who on paper may not seem right for one another. But the film is also about family and how you sometimes love them or hate them but you have to be for them in thick and thin.
Justin works for an ad agency with his father who is very domineering. While driving to a business meeting young and handsome Justin runs off the road to avoid a rabbit. He finds himself stranded in front of a ranch farm 'Angora Ranch' owned by hunk Jack, a man almost twice Justin's age. Justin and Jack feel an instant connection and Jack's father is more than happy to fuel the fire. Jack's father lives with him and had been very progressive sexually in his times and fully supportive of his son being gay, but at the same time he is noisy and very pushy and wants Jack to settle down. Neither acts on the sexual tension and next day Justin leaves for his meeting, but he comes back and the duo finally get to spend sometime together, slowly building on their warm tender love story. Jack always brings up the age issue but Justin doesn't mind. After some low key drama they confess their love, but a surprise visit from his meddling father doesn't prove to be easy. It a turn of events, it seem like Justin's father and Jack might have fooled around together in their younger days (although why this was brought up was never relevant the story). But Justin finally stands up to his dad and tells him that he will do exactly how and what he pleases. The duo slowly discover that each is what the other has been searching for all their lives, if only they can figure out what to do about their fathers.
Even thought the film has clearly home video vibe, but once you settle in, this little charming film can draw you in, if you can ignore the average acting abilities. For me, the meddling Jack's father was a hoot. The way he uses every opportunity to bring the two guys together reminded of the whole shipping culture these days. Contrary to this, I would liked to have seen a bit more background on why Justin had this very strained relationship with his father. It would have added a little more layer. The whole rabbit incident which eventually brings the guys together his something that you can find either cute or wtf, but for me, I was somehow engrossed in their love story and was rooting for them. These are two no nonsense individuals , very basic, very average, who just want to love and be loved and are of course attracted to one another. And the fact that the small towners are so acceptable of Jack's sexuality was very refreshing. Trust me, the film could have been much worse but somehow its very bearable if you keep your expectations to a bare minimum. The cast seemed primarily novice which reflects in their acting, but again , for some odd reason, I am willing to ignore it. The fact that the film is a simple love story, not bitter or angry, no over the top drama, not trying to make any political statement, just a simple love story between two men with a substantial age gap. Its a traditional basic romcom from back in the day and guess what, it somehow felt charming while watching it even now, despite its many limitations and flaws. No one is going any awards for this and the film is not going to break any ground, but maybe on a cold cozy night, watching it could give you some warmth. (5.5/10)

ILHiker said…
lol, love the review and totally agree. Perfect movie? No. Charming and heartwarming? You bet. The whole production just feels a bit out of left field in its little oddities and I really appreciate that. Loved the romance, loved the rabbit, the old music, the meddling dad. I've been watching some non-gtm stuff lately, October being a time for those old black and white horror/sci fi, and a strange affinity I have with b movies with groups of friends out in the woods dying due to a virus, monster, each other, curse, etc. Then switched to a couple of british period series, The Village and Grantchester. Both have a gay character and a nod to the difficulties of the time, but more of a cameo than an actually storyline, though nice to see at least a little representation. I have an odd craving to rewatch The Wild Reeds, which I believe I saw back in the 90s and didn't leave a huge impression. I'll keep an eye out for it--you never know how a movie's going to age on you.
October 31, 2022 at 6:02 PM

Golu said…
I have no love for scary/horror/halloween films. I stay miles away from those and they spook me big time. But yes, of late I have started enjoying British period dramas, if done well.

And same here. I have been watching a lot of non gay series but mostly the new ones on all those standard streaming platforms, the ones which get good buzz. I just finished marathon of Succession in last few weeks and loved it. Its like Game of Thrones but in a corporate world.
November 1, 2022 at 7:09 AM