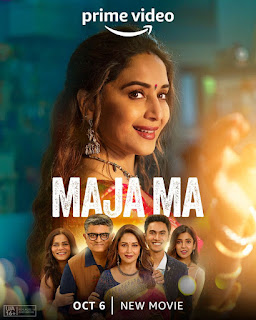 I had no clue this movie will fall somehow in LGBTQIA category, but still I was expecting a lot form this film, just because the names involved. The director has given us some really good stuff in the past, and with the lead actress being a revered actress in India film industry, the expectations were naturally higher, especially since this is Amazon Prime's first Indian original film. Sadly, despite a very promising plot, the execution and the handling of the characters leave a lot to be desired.
Tejas wants to marry an NRI girl Esha, who comes from a very filthy rick Texas family born to India parents. Since her parents are extremely rich, they always question others' moves and in this case they decide they want to meet Tejas' family in India before anything can happen. Tejas' family back in India has her godlike mother Pallavi, who could do no wrong, his father and her sister who is doing her PhD in Gender studies and has her own issues with marriage going on and is a being activist for LGBTQ+ rights. In a very awkward and random conversation the mother tells her daughter that she is a lesbian and has always been. Somehow a video of this chat gets made and gets out in public domain. The scandalous news threatens Tejas and Esha's wedding plans but most importantly what does it mean for Pallavi, who has been seen as role model not only in her family but also by neighbors and society. She is suddenly shunned by everyone and the rich NRI parents ask her to take a lie detector test to prove the truth. We are then told through flashbacks that she indeed had a girlfriend in the past before marriage but only if things were that easy. We see how the family members react to this truth especially by a very confused, self-obsessed son and a husband who is too simple to even understand what does this really mean. Of course, after some clarifications, conversations, family issues; everything magically gets well and Pallavi is accepted for who she is.
I have many issues with this film actually. The subject is nice. The makers are trying to show us and remind us that our parents sed to have a life when they were young and they have all gone through their own journey, trials, experiments, love stories when there was no one to support them. We need to understand that. Leanly, this god like mother figure had a life of her own when she was a teenager. But in some very badly characters around her complicate things. Her very loud mouth daughter literally forces her mother to speak up and come out. She is constantly reminded that only an individual can and should decide when to speak up, but this daughter is so aggressive that she makes it her own personal vendetta to get her mother rustic without thinking. Then there is son, who is so hell bent on getting married, that he sees no problem with his mother taking. Lie detector test. In fact, in a bizarre turn of events, he even plans to take her to a priest hoping to get the lesbian evil out of her. Weird!! And then the loving husband suddenly decides that he can no longer be a husband to someone who has lied all though her life. The remaining characters are all caricatures. The forced American accent by everyone is so ridiculous that it doesn't evoke any laughter and you just roll your eyes in embarrassment and lets not even talk about how regressive they are shown to be in their ideologies. The comedy seemed very forced at certain places and then the whole cancer angle was just not needed for one of the important characters. The only saving grace of the film is a very elegant Madhuri Dixit playing Pallavi trying to keep her grace and poise and keep he family together despite keeping her sense of existence intact. I a very important role, her ex-girlfriend who is still in her life gets to shine in a couple of scenes and add a bit of humanity to the overall story. But the biggest problem is that the makers have used the LGBT angle to help a heterosexual couplet their marriage back on track, rather than try to explore in deep on how Pallavi was forced to get married despite identifying herself as lesbian, and possibly other challenges that she must have had to face because of this. Thankfully whatever is done has been done in a sensitive manner but just brushing the topic is not enough. You need more bravery. And the ending was so lame. Everyone suddenly accepts everything. Come on.. be a little more realistic.
Maja Ma tried to show the journey of a woman coming out to her family and how she found acceptance, but there is nothing new that the film has to offer. The makers could have delved deeper into the subject and taken a more realistic approach, which would have made it a more intriguing watch. As a whole, for now, the film failed in trying to achieve what it intended to. (4/10)