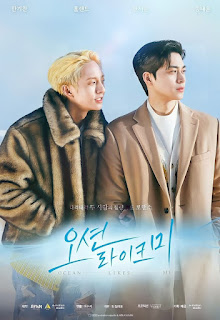 This series is also available in movie format, which is what I saw, but as a series, it is 8 part with about 15 min episode each, making it a total investment of under 2 hours. THis show is actually a good example of how even with a small budget, but with good actors and directors, something likable can actually be presented on the screen. Sure, the bizarre ending of the show has no excuse and is definitely one of the weirdest ones, which we will talk about later, everything else, including charming leads, delightful chemistry and a light touch of comedy were all going in the favor of the show.
Han Ba Da has just moved to an oceanside community. We are later told that he worked as a professional French chef and has moved after some misunderstanding and breakup with his ex-boyfriend. He wants to now start his own Udon Cafe near ocean and is tricked by a local politician's girl to use their space for restaurant, even convincing him to give her 70% of profit share. The opening day os the restaurant is bad and no one shows up. On the second day, when Ba Da is driving the girl to some place, he accidentally hits a boy named Tommy, whom he brings home. Tommy asks for a warm noodle udon soup the next day as a compensation. But when he also notices the lack of customers, primarily because of Ba Da's cold nature. Tommy's outgoing personality and aggressive sales tactics bring a steady stream of guests to the udon shop for that one day he is there. Ba Da hires him full time since he only knows cooking and not customer interaction and Tommy also helps him negotiate his profit sharing with the girl. The duo soon have a good understanding together but one day a small mistake happens angering Ba Da who asks Tommy to leave. But he soon realizes his mistake and that how he is dependent emotionally and professionally on Tommy. He searches for him, apologizes and professes his love. Ba Da's success continues and this success drives Tommy to try his hand at music again which has always been his passion. Then randomly Tommy disappears for one year, Ba Da closes the place to open a big restaurant from the money he won in a local championship. One year later, he comes back to reopen the cafe and Tommy shows up again, hopefully this time for good.
The two charming leads carry this cute, breezy love story with ease throughout. They both look good, act well and have some amazing connection and at no point it feels forced. Yes, the story is basic, but despite that I found it extremely engaging and fun to watch (minus the last weird 10 minutes, for sure). Some of the events felt stupid, but I am not sure if they were meant to be that stupid or stupid funny, because its the latter what I felt. Maybe that's why I ended yo enjoying it. The way the two boys meet, the random ex-boyfriend's showing up for no apparent reason (the whole competition and his whole character adds absolutely nothing to the story), how the misunderstanding between the two happen and other things like this. Yet, the two diverse personalities have something that keeps them together. The series doesn't feel rushed or slow, the pacing was just perfect. The girl was another fun character, whose mischief and trying to outsmart the novice Ba Da was fun to watch. Ba Da is endearingly earnest, while Tommy is colorful and sensitive. And the two actors playing those roles suit their part to the T. Coming to the whole ending, I just didn't get it on why they had to spoil the whole thing. Tommy says he wants to get back into music and Ba Da agrees to fully support him; so why Does Tommy have to disappear like they are having a break up. The whole sequence of closing the cafe and then reopening after year makes no sense. Also in todays day and age, when Tommy was savvy enough to use social media to promote the Udon cafe, there was no reason these two made for each other, lovebirds could not have continued a relationship. They clearly cared for and loved each other. I would have rated the show much higher, despite its flaws, but the ending was just bad. I have to say as it was.
Even if we forget the ending for a minute, there are learning and take aways form this show how to make an endearing show with minimal but good actors, definitely a capable director, decent camera and a thin storyline. Big budget and high production values are not always a guarantee. I'd still recommend the show for its cute romance, an engaging albeit silly story, and delightful characters. (7/10)

Sailor Maan said…
Totally liked this one too for the most part. Except for that catastrophic ending ruining the whole thing (and why I couldn't recommend it...). Apart from the ending, this crazy stupid funny series is heartwarming. Ba da and Tommy tandem works perfectly. Can't explain why, but this one felt more gay and less BL to me (if that makes any sense).
September 12, 2022 at 8:26 AM