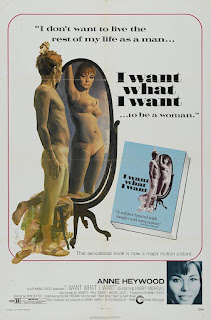 A surprisingly touching, respectful, and accurate fictional portrayal of the coming out of a transgender woman in England in the early 1970’s. This film avoids nearly all of the “transploitation” themes of most works up to the 2000’s and it could be an interesting watch for anyone interested in a transgender “coming out” story from 44 years ago. Having said that, the film does get repetitive where not much is really happening.
A young boy Ry comes from a upper class background and works in a real-estate office. He lives with his father who is a very strict dad. But Roy has secrets and has been dealing with gender identity issues. On eight when he thinks he is alone, he is wearing women clothes and makeup and is discovered by his father. The father throws a fit furiously unable to understand this. The next day Roy runs away from home, dressed up as a female and starts living at a boarding house learning to practice feminine comportment, makeup, and dress. Roy slowly transitions into Wendy learning through her mistakes and her very first public appearance as a woman is full of fears. She soon takes residency in another boarding house with an authoritative owner and her husband.  Over several months Wendy adjusts to full-time life as a woman, coming out of her shell and making friends, learning more about comportment and dress, and even perfects her makeup. Wendy tries to get a job, but discovers her lack of documentation and the fact she’ll have to out herself prevent her from finding work. Wendy also visits a doctor to get information about transition. After a failed sexual assault, the film moves a year later when she has had a successful surgery and the film closes with Wendy receiving her new passport in the mail, standing in an apartment in the city. As the camera starts to draw away, her final words are “I must always remember, how lucky I am to be a girl.”
For a film that came out in 1972, it cannot be described any less than brave and progressive. Sure, the makers used a cis gendered woman to play Roy/Wendy; but come on, we are talking of 70s. This how things used to happen back then. Covering subjects like family rejection, inability to find work, ostracism and loneliness, uncaring medical practitioners, and even sexual assault for struggling trans people are topics which are so relevant even today. I can totally see trans people connecting with the film at many levels. Sure, many scenes focus on Wendy trying out clothes, make-up etc, and I was also guilty of slightly bored of these scenes, but in reality for a trans person, there are the instances where for many transgender women the experience of softer female clothes is both strange and gender-confirming. I would have hoped to see something more of Wendy's future and even for what is presented, it is way ahead of its time and should be a reason enough to celebrate queerness. (5.5/10)