Johnny and Lyman: A Life Together (USA)
This film that highlights the loving relationship between two gay friends for more than 65 years, not only shows that love doesn't discriminate, it thrives on kindness, romance and the little things. Sweet, funny, candid and entertaining, the film shows them getting married, being role models to many other gay couples, all the while being rather matter-of-fact about it all. 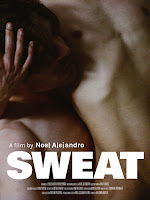 Sweat (Germany)
When Mullen answered the door to let Christen get in his flat, he believed he was just helping out a friend of a friend who needed a short break. As the so-called "emergency" visit turns into a forced obscuring small talk on which Christen just wouldn't leave, Mullen vividly feels his misgiving thoughts becoming complete rejection just before transforming into the sensual redemption of his most feared fetish.

Amerikanos (Greece)
Tale of a Greek immigrant in San Francisco, Christos Dimas speaks convincingly about his own experience as a gay man in San Francisco. His story is interesting whether he's talking about working at a pizza place or working the streets.
The Man that Got Away (Canada)
A musical documentary that tells the true life story of Trevor’s great-uncle Jimmy in six original songs.

Breath (Greece)
A short film, four extracts, a goodbye to the lover, the mother, the breath that leaves behind a poetic meditation on grief, death and love. It was a very odd and weird film IMO.
Tender (Greece)
Greek drag queen hustler shares her perspectives on life and love.

Playhouse Presents s02e05 - Mr Understood (UK)
Thirty-something transvestite Gary at last plucks up the courage to attend a disco for cross-dressers but is hesitant as he argues with his alter ego Frank the pros and cons of coming out in public as a transvestite. When he gets to the event he is taken in hand by the older cross-dresser Jim but whilst Jim might give the younger man some confidence he has his own alter ego to express doubts - and she's a female.

Vapors (USA)
A controversial look at the lives and conflicts of a group of homosexual men set during one evening in a New York bath house for men. A deep and philosophical discussion about marriage, homosexuality, and other social taboos begins to unexpectedly unfold between the two different men, creating a non-sexual, yet intense emotional intimacy in a very short time, while everyone around them are screwing like rabbits. I can't believe this short film came out way back in 1965.

Zwillinge (Germany) [Twins]
On the eve of his wedding Daniel meets again with his true love-his identical twin brother Jan. For the last five years he's been running away from his feelings. Now, on his stag night he is being tested once more.
Ballad for a Lonely Man (France)
A naked man runs around trying to make a statement on ecology. Very weird !!

El Prisionero (Argentina) [The Prisoner]
Group of boy scouts capture scout from another troop and take him as a prisoner. Not a gay film, but hints of BL towards the end.
Gilles, José, Marcel (France)
As colors darken and images of bodies are bleached out, the portrait of three gay male friends in a room becomes a pattern of phantoms caressing each other in a rhythm of light and shade.

Camionero (Spain) [Truck Driver]
In a boarding school, Raidel is witness to the abuse suffered by his schoolmate Randy. A realistic film about bullying as teenagers.
Small Arms (USA)
A college student in Northern Michigan, harassed with anonymous homophobic threats, seeks out shooting lessons with a reclusive survivalist in an effort to prove his manhood. 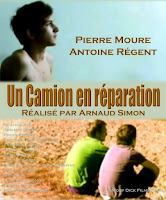 Un Camion En Réparation (France) [A Truck Under Repair]
Twenty-year-old Eugène is somewhat aimless and has not been doing well in university. He is staying in a small village for the summer. He awkwardly seduces Pierre, a slightly older man who is working for Mathilde as caretaker for the season. Pierre is initially open to the relationship, but quickly becomes reluctant to become too involved. I liked this film a lot despite it getting slightly confusing at times. 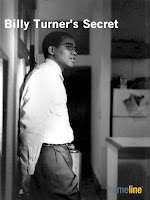 Billy Turner's Secret (USA)
Billy and Rufus are roommates and good friends. But since Rufus is a strong homophobe, Billy can't tell him that he is gay and has a boyfriend. When Rufus' girlfriend's sister finds Billy and her boyfriend, she starts blackmailing them but eventually Billy's secret comes out. Billy reacts as expected. But Rufus gets thrown out by his girlfriend and is also beaten and is now forced to think his views on gay men and its time to reconnect with his true friend Billy. 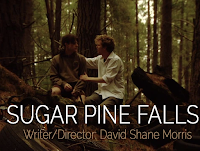 Sugar Pine Falls
On the run with his mum, Monty arrives at a caravan park in bum-fuck nowhere where he meets the dark and broody James. Forced into an awkward friendship by their overbearing mothers, Monty and James form a unique connection that takes them both on a mysterious journey. Monty finds out that James likes men and with this information he makes a move on him which may take their friendship to another level.

Ostia (UK)
Pier Paolo Pasolini takes up with a young man and journeys to Ostia, and his death. Ostia is a fascinating short film which reconstructs the events leading up to the murder of Pier Paolo Pasolini. Ostia relocates the proceedings to London and stars Derek Jarman as Pasolini. The film features an evocative dream sequence which is accompanied by poignant excerpts from Pasolini’s own poetry, as read by Jarman.

Dragula (USA)
17 year old Charles is a shy teenage who has stage fright. Around halloween his friends take him to a drag bar where Charles gets transfixed by the hypnotic gaze and overwhelming stage presence of "Dragula", the drag queen. He reaches out to her to teach him to be confident and proud of who he is. The very next day, Charles immediately decides to take the plunge and sign up for the school talent show, where he plans to give them a show they will never forget. LOVED it!

This Summer (China)
A boy breaks up with his girlfriend and remains alone. Later, he finds a wounded cat in front of the door house and decides to take care of him. In a fantasy world, the cat is now a young boy. Can a cat (another boy) become your life partner? Weird!
Tình cờ mùa hè năm ấy (Vietnam)
A high school teacher was extorted by his student by asking him to date for a day, and what he would do.

Credence (USA)
Story of a family torn apart during the last evacuation on earth after violent storms have made survival impossible. The film follows 2 fathers' decision to make the ultimate sacrifice to give up all their possessions to ensure the survival of their daughter, and the entire human race.