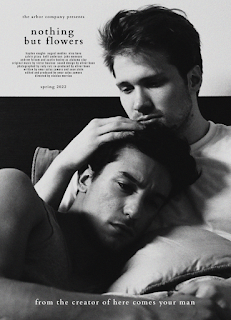 We have seen a few movies before where a loving couple's happy dreams take a questioning backseat when someone's aspirations for life and career start priority. No judgements and nothing wrong with that, since this subject can bring some interesting conflicts to the table. Sadly in this film, the conflict feels so amateurish and one of the guys comes out such a negative person, that I kept wondering why was the couple together in the first place. More on that later.
Max and Ash have been together for about a year. Max, at dinner, announces that he has been accepted in music school in New York. But the things that the duo live in LA. Max asks Ash to move to New York with him but he point blank refuses. In fact, Ash coldly announces that this must mean the end of their relationship. His logic is that he has his friends in LA and is not willing to make the change, despite repeated attempts by Max to explain him that he already knew he was applying to colleges all over and how is it his fault if none of the local colleges didn't take him. Time flies, they both talk and discuss and the date of Max's departure is coming close. Rather than spending time with his boyfriend, Ash decides to spend the day with his girl best friend and only when she says he should o back, he does. They spend sometime together, before a surprise party is thrown in their face. The next morning Ash disappears again and heart-broken Max leaves for New York.
There are so many problems with this amateurish execution. When you are in love and a person announces good news, least you can do is pretend to be happy. Ash come out as a big jet and a very very self centered man throughout the film. Not only doe she plainly refuse to move, he doesn't even show an inclination to work towards the relationship. He just announces that they should break up. Max, is horrified to see such a reaction. Also Ash's logic that he has friends in town, but he really doesn't. All he has is a girlfriend who he is close to. It feels like Max needs to cling on to someone all the time, which is also very briefly mentioned to us, how he got together with Max just a few weeks after he broke up with his ex-boyfriend. The film does offer a number of long discussions concerning the ultimate fate of the relationship, but at no pint, not even for a few seconds, does it let us connect to any of the characters. I felt Max's predicament, only because Max was a jerk , but beyond that neither Ash, nor the girlfriend made any sense. And then we see random discussions , introducing even newer people in the surprise party and we witness conversations that have absolutely nothing to do with the overall film but we follow around people in meaningless conversations for a good 30 minutes (at least it felt very long). It is slightly amusing though that most of the people at the party don’t know each other, providing a bit of levity to a mostly somber story. This film has loopholes, and it just feels that Ash is looking for a reason to breakup with Max. He even books a Leigh too go with his friend to Norway, meanwhile he could have used that money to go with Max. I mean he doesn't even try, not at any single instance. The only one good thing about this film, is the extremely good looking Max, who also acts quite well and just like the audience is shocked at why Ash is acting the way he is.
The film would have made more sense, had we received some background on reasons for the individuals' behaviors, especially Ash. In absence of any of this, the film feels rushed, amateurish, half baked plot and leaving a cold feeling about the narrative’s predicament. (3/10)