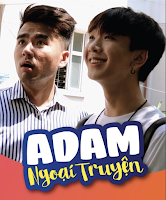 This cute little series was made by CIF-TV from Vietnam. Think of it as really amateur stuff released on YouTube, but prepared to be surprised. Keep your expectations super low and you would maybe end up laughing at quite a few places with all the absurd silliness that's happening around in this show. The series is primarily about a young gay couple with a series of really short sketches, some funny, some weird and some inexplicable ones. At 6 episodes each with 3-4 short snippets, the total runtime is just under an hour.
Nom and Dang are a cute young couple living together. In the first couple of episodes we watch their cute loving romance which includes texting each other form same room and other cupid stuff like that. It's silly but cute. Things take a turn, when Nom's ex-lover's sisters shows up unannounced attire apartment and starts living with them. The outgoing Dong doesn't appreciate the situation and some hilarious events follow, which eventually make the sister leave home and let the couple live in peace.
It's really hard to describe or review such content. I am guessing this channel provides an opportunity for story tellers too come out and show something new. And here, I don't think the makers are trying to tell a story per say. Their aim is to entertain and they do so brilliantly with some very short sketches. The two actors do a decent job, with Dang specially doing a brilliant job as the jealous lover and doing whatever tittles to keep the fun alive in their relationship. The arrival of the unannounced guest adds more fun to the whole banter. The title of the show feels weird and probably not translated well. But if you just have to kill some time here and there, you can watch this. Of course, I can come up with a lot of negatives for the show but that wouldn't make any sense, since the sketches are purely for entertainment and should be seen as such. This is just silly, over the top, fun stuff which you are not supposed to take very seriously. (5/10)

Sailor Maan said…
Followed your recommandations, kept my expectations low and it was fine like this. Indeed, a light low budget comedy that has some very funny moments.
July 12, 2021 at 8:30 AM