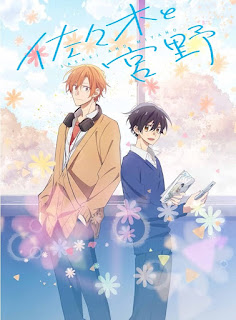 I am starting to like these anime shows. I think I have seen only a couple of them so far but this one was actually quite nice, simple and endearing. A simple tender love story of two school boys , one year apart, who are both struggling to tell each other how they really feel. This heartfelt series features an introspective coming-of-age journey, handled sensitively and thoughtfully. The sweet, gentle anime will appeal to many fans of the BL genre. With 12 episodes of about 20-22 episodes, its a good watch.
Miyano, an all boys high school student is obsessed with BL novels and his friends know it. But he is very self-conscious of his hobby around strangers and would rather keep it a secret for the fear of people judging him. Till this point, he has never questioned his sexuality just because he likes BL novels. He insists that he likes girls. One day when his friend is getting bullied, his one year senior Sasaki suddenly appears to his rescue and they realize that the two have a common friend. Since they both take the same train to school, their interactions keep increasing every day. Miyano opens up about his love for BL novels and after borrowing a couple of them from Miyano, slowly he starts taking a liking to them too. The dup will spend time together discussing the manga , their data and will take the train together. The more they chat, the more they both realize that they feel strongly for each other. Sasaki is more sure and he even asks Miyano if he wants to go out, but the suddenness of it freaks out Miyano. Over the course of many episodes, the duo finally find the courage to accept their feelings for one another, actually admit to each other and their friends and stop caring about what anyone will say about a boy going out with another boy.
This coming of age series about teenage crush is very charming and is actually handled with understanding and compassion. This is not bogged down with unnecessary drama. The many friend of both the guys does add to some confusion at a few points, but actually it is also fun to see, how they in their own ways are trying to ship Sasaki and Miyano together. The simplicity of this show is actually the most charming aspect of the series. Think of your teenage years, the giddy feelings and the knot in your stomach that you feel when you think you are falling for someone, when you want to spend every moment with that person, when you smile and blush and giggle on silly things. The animation is done really well. But it sometimes does get confusing when it suddenly goes into these meds of euphoria when the main characters become skids and we hear their inner thoughts. For non native speakers, I feel that's hindrance. Also I think The show is a bit stretched by the indecisiveness of Miyano. It takes twelve episodes for Miyano to sort out his sexuality, a long personal journey filled with doubt. At last, he admits to being infatuated with Sasaki on a physical, emotional & romantic level. Sasaki has been waiting patiently, but Miyano is caught up and eventually reciprocates his love only in the final episode. Its understandable that he would wanna take time, but that doesn't mean that for audience you should also stall time. Th best was the last episode when they finally kiss after confessing to each other. Even in those scenes, they do keep the charm and innocence of teenage love and I liked that fact.
The show can use some improvement , but thanks to a great beginning and an end, this charming, coning of age teenage love story strings your heart. The ending is powerful and happy and you can feel the love is all over in the air. (7/10)

Unknown said…
Thanks for putting in a review for this anime. Because of your review, I watched it myself and oh boy, loved it so much! Didn't watch it on one sitting though as I felt that the story is being dragged and I needed to take a break from the cheesiness but once I reached the last episode, I can't help but feel the excitement that finally, Miyano is now telling Sasaki that he likes him too...Urgh! It's so wholesome and adorable and cute, I just want to live in a kind of world that they have. Thanks again, and hoping to see you review more anime BLs in the future!
June 28, 2022 at 2:01 PM

Golu said…
yeah, it drags in the middle of show when things Strat to get repetitive but it had great finale. I am glad that you liked it.
If you have recommendations of any more anime BL, do let me know
June 29, 2022 at 7:13 AM

Unknown said…
That would have the live action. I'm not sure if you would like to watch the anime version though since its from the same story. But it can be a different experience, so I'd still recommend watching it. :)
July 9, 2022 at 3:24 PM