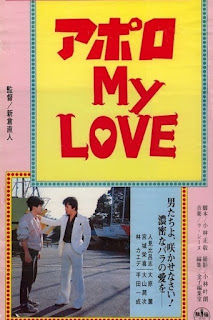 OMG!! What did I just see. I know I recently got familiar with a term called 'Pink Film'. I am beginning to wonder if this is something very specific to Japanese films. Because this film was like a Pink film times two. With a paper thin gay love plot, more than half of the film was simulated sex scenes of all kinds of nature which was probably used to titilate audience.
Soichi lives his life on a yacht. He had met young and naiive boy Masao, about a year ago who had run away form home and since then they have bene living as lovers. Masao calls him as Apollo. Soichi also has sexual relations with his step mother, who is younger than him. Apollo has to leave to meet the woman to arrange for money leaving Masao alone on the boat. In his absence, 2 men and a woman come into the watch, sexually assault and are and torture Masao. It turns out that Soichi at some point had raped the girl. Apollo comes in time to save his boyfriend.
Yes, trust me this was the one hour long film, with a paper thing plot. It was almost a soft porn without showing genitals but at the same time nothing was left to imagination. I am scandalized by the thought that its a Japanese film that too from 1984 (almost 35 years old). How did the makers manage to get away with such explicit gay sex scenes and rape scenes and torture scenes is beyond me. I guess there is enough reason to not call this queer cinema but also not call it pure porn at the same time. Soichi (or Apollo) just seemed like a guy with high sexual drive since he apparently sleeps with anyone and everyone, almost raping them, which is evident from how h literally forces himself on the boyfriend the first time. Just stay away form this one. Besides the cute young boy, I was actually a bit ashamed of having watched the film. Period. (2/10)