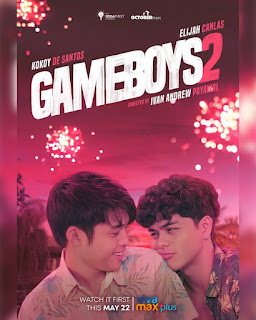 Coming up with this sequel makes no sense. Gameboys The movie came out lat year which was actually a worthy continuation the much loved and appreciated origin story of Gav and Cairo. This season 2 is just the rehash of the film with some extended scenes. So my review is going to be really short and tiny.
I repeat, For those expecting a brand new season and storyline following Gav and Cairo, prepare to be disappointed like me. Season 2 ended up being Gameboys: The Movie, with some extended scenes (not that many really). Even the show ends as the movie did but I guess just for fans they also added a scene with a very happy ending. But the way it has been added also doesn't make any sense. You don't know if it's after Gav goes to NY and comes back, Cairo returns to the province with his family and they both meet later, or they never leave Gav's house in the first place. As audience you make your own theories and thats it.
The makers had famously announced in an interview that "The scenes you see in the film are just 20 percent of what’s in the series." What a liar. The series is almost 85% of exactly the same stuff as series. They just added the scenes involving Wes and Terrence, that were probably shopped off at th movies edit table. Besides this, unless they had international release issues, this I nothing but cheating with your loyal audience giving a rehashed version of the movie. I am going to refrain from rating this, because as much as I loved the show and the movie; coming up with a season 2 in this case feels like cheating your audience, wasting their time, all to just cash into the popularity.

Sailor Maan said…
Ok so after watching Two and One, it gave me the need to finally watch this season 2. You were right, it is exactly the movie. I can't tell what scenes were added because I've seen the movie too long ago bit I feel I remembered most of them.
I won't complain though as you had warned us, and I had exactly what I came for: rewatching this couple and their friends and all their good vibes. You can never have too much of a Pearl in your life XD
December 5, 2022 at 6:09 AM