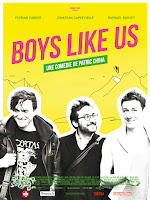 A story of friendship and re-assessing your life, this film does bring a relatively refreshing subject from al the stereotypical gay stuff that we get. But does everything that sounds good as an idea, actually translate into something interesting; we will have to wait and read? But whatever happens, I would like to applaud the makers for trying something different. The characters here just happen to be gay. This film could have as well ben equally meaningful with straight characters because ultimately the film is about reassessing friendship, insecurities in life and whether or not we are in love.

Rudolf, a bookshop salesman and a wanna be writer gets dumped by his boyfriend. So after the break-up, he is heart-broken and decides to leave Paris to go back to Austria and start his life afresh including leaving behind his 2 best friends; Gabriel, an actor and Nicolas, a bar waiter. Unable to figure out how to react to Rudolf’s neurotic decision, the two of them decide to take off from work and join him on his trip to Austria to make sure things are fine. Rudolf decides to go back to his birth village, in mountains, in serenity and peace, far away from chaotic Paris so he can concentrate on writing his book. Little do the three of them know how eventful this trip will be for them. Rudolf rallies that even to get a home, he has to get a job first and that itself is not going to be easy in that small town. Gabriel, who sees a shrink because he cannot get over his ex-boyfriend  from many years ago, sees a man and starts losing control thinking that its him. And finally Nicolas, as always is looking around just for random hook-ups with young men around the town. The three of them even have an argument when they accuse each other of not having done anything meaningful in life. Ultimately, they all will have to find their own way of dealing with their insecurities and moving on with their life.

As I mentioned before, the story was quite interesting and the beautiful Austrian countryside landscapes are just beautiful and breathtaking. The acting from all three lead characters is quite good. Rudolph struggling with a break-up and wanting to leave everything behind including his closest friends, Nicolas avoiding true love by hooking up everywhere he goes and Nicolas trying to still nurse his heartbreak from many years ago. One thing is clear thither friendship is strong and the three of them are there for each other despite them having their differences. They may not have done well for themselves but hey care for their friends and sometimes, you have to be harsh to show your friends what the reality is. From an entertainment point of view, there is not much thats really happening. We just see Rudolph trying to fit in back to a quiet life while Nicolas and Gabriel trying to support him. There are some funny sequences where Rudolph does the translations from Paris to German and vice versa but they are just very few.

Overall, The film is not boring but is not great by any means. I would say that its strictly average. (5/10)