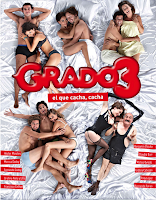 Now this was definitely a "different" film. God or bad? Thats for you to decide, but for me it was pretty lame. You know how sometimes people make movies just for the heck of it. There is really no reason or motivation to make a film , you just do it. This is one of those categories.

The film shows 5 stories told simultaneously is 3 different phases which according to me are the introductions, talk about going into sex and then finally the actual sex. We have a gay guy and his girlfriend who keeps insisting that he might be gay because he has never tried sex with a girl. She wants to get him out of routine. Second, we have a young married couple whose sexual life has become a routine. They are coming up with ideas and finally find something that they both like. Third we have 2 ex lovers. When they meet again, they start having these sexual feelings and each one thinks that the other one is trying to get him/her in bed. Whats the truth? Fourth is a hooker. She goes to this old man's house as a birthday present. Initially reluctant she agrees to spent time with him and is pleasantly surprised by such a gentleman and such an animal in bed having his viagra kicks in. Finally we have 2 room mates. When one the guy's girlfriends come, he wants his room mate to join in and work his fantasy. He wants his girlfriend and his room mate to do what he wants them to do and he just wants to sit and watch.

This film is very light weight, supposedly a comedy. The stories have nothing original, the overbearing end up exhausted and in one other time. The most interesting one according to me was the story of the couple bored with their sexual routine. Obviously, the film tries to reflect reality, the playfulness and warmth inherent be Chilean, but little is achieved when the story loses all force as little more plot development than large-screen sex.

The film is very forgetfull. There is nothing worth remembering. (2/10)