En Colo (France)
Maxime; an introverted youth who his friends are beginning to suspect could well be gay, courtesy of a truth or dare boy-on-boy kiss with cutie Mathieu that Maxime seemed to have enjoyed a shade too much. But that doesn’t mean he’s gay. Or does it? When their teacher (Coach) tells them that he is gay as well and just because he doesn't look like gays people expect, doesn't make things funny. This one incident changes so much. The students can see more openly now. (8/10) 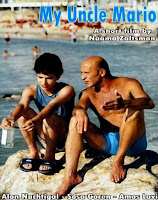 My Uncle Mario (Israel)
A young boy delivers food in the summer vacation for this mother, who has some sort of a restaurant. Suddenly his uncle Mario, who lives in Italy, visits them by surprise. The boy's life changes when he follows his uncle one night to an appointment. After that night things will never be the same. Uncle Mario is gay and maybe the young boy is too but the mother doesn't want to take chances and sends back the uncle. (5.5/10)

306 (USA)
Showing us a day in life of our lead character, we see him studying and then taking up a job as a male escort, getting fucked (literally) and then go back to bed with his girlfriend as if nothing ever happened. The film questions on how much do you really know a person with whom you spend so much time with and what are usual social ethics. Only thing that confused me was the title of this film. I still cannot figure that out. But I think, the film maker shows promise in this short film. (6.5/10)

Un Beau jour un coiffeur (France) [One Fine Day, a Hairdresser]
It is a great little movie in that it focuses on what people do for love. A happy young guy suddenly finds himself falling for a hairdresser in his town. He will go to any lengths for him but it turns out that he is in love with a girl. They end up being friends and our man finally has a ray of hope when he potentially meets another guy. A very sweet film and the subject has been handled very nicely. Good actors and lovely script. (7/10)

Time off (After) [Israel]
The film focusses on the tense interaction that happens between the lieutenant leader and young trainee Yonathan. these 2 men. On their afternoon break, when Yonathan sees the leader in a park, he follows him to a rest room where he finds the lieutenant having sex with another man. Because of this he reaches back the camp late and the lieutenant punishes him. The film ends when Yonathan finally hands over the lieutenant's id that he left in the men's room. (7/10)

Lonesome Bridge (USA/English)
Gay boy falls in love with his straight room mate. His only girlfriend is having hard time to get him out of his infatuation. Straight dude finds that gay guy fantasizes him and is shown talking to a goon. Next we know is that the goon beats the crap out of gay guy. Our gay man confronts him on why did he do that and is now totally over him. Twist in the story is that it was his girlfriend who paid the goon to beat up the guy because nothing else was working to make him realize that the straight dude is not gonna love him back. (6/10)

Say My Name (UK)
A short contemporary Black British gay love story. Chris' boyfriend Ricky ignores him while walking on the street because he is afraid of being 'outed'. Ricky now has to figure out if he loves Chris enough love him enough to break taboo and go against community. (3.5/10)

We Once Were Tide (UK)
Set on the Isle of Wight, the film tells the story of Anthony and Kyle, and their last night together as Kyle moves away leaving Anthony to look after his terminally ill mother. Poetic in nature, the film is concerned with exploring the intimate and often unspoken moment in which we give something special away. How rare to come across such a well made, deeply affecting and gorgeous gay short film with a big heart at the centre of its story. (6/10)

3 Lads, An American Fool And One Night (USA)
On the eve of his anniversary date with his girlfriend, Greg gets an unexpected visit from 3 strangers who claim to be his friend's friend. This event which ultimately makes him question his sexuality and his life, when one of the guys and Greg have this instant connection and one night stand but nothing happens beyond that. (6.5/10)