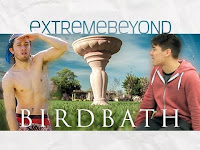 Birdbath (Australia)
A young Oz-Malaysian couple struggling with their relationship. The asian guy is not sure if his family will accept their son’s sexuality and relationship.

Curmudgeons (USA)
A pair of senior citizens in 80s have a relationship that shocks both their families. When the grand-daughter comes to visit, Ralph couldn’t possible imagine the surprise she has in store for him from his lover Jacky and his grand-son. A potty-mouthed, but endearing, comedy.

Realness With A Twist (Paris)
A young man searching for identity and acceptance as he splits time between the normal everyday life (pretending to be playing football) and the thump and excitement of the Parisian voguing scene.

Una pared (Cuba) [A Wall]
Tommy, a young construction worker, is doing some work on a house owned by Saulo, a mature music composer. Tommy is attracted to Saulo and is always looking for options to be near him. Nevertheless, both men never touch, except with sounds, words and stares.

Welcome to the Candy House (Germany)
Once again, Hänsel and Gretel have lost their way. They stumble through the big city in search for place to stay, ultimately ending up in a backroom of gay sex. Meh!

To the Marriage of True Minds (UK)
Hayder and Falah, two young Iraqi men, seek asylum in London from Baghdad in an illegal cargo vehicle. They separate on entering England because of security. We follow Hayder through his search for Falah in the Arabic communities of West London. The lovers are ultimately united.

Light Bulb Sun (UK)
Ellis, Fay and Freddie are a group of close friends. Fay and Freddie are together in a relationship but tension soon starts to build between them all as Ellis’ true feelings for Freddie come out. He is in love with his best friend.

Last Will & Testicle (US WebSeries)
A gay man reveals his testicular cancer diagnosis to his quirky friends and family, deals with his treatment, and confronts his nightmare walking and talking lump of ball cancer. This 12 episode web series (each episode being 3-4 min), shows a very funny take on the disease, the reaction of lover, family, friends and colleagues. It was good comedy but sometimes just bland.

American Male (USA)
A depressing reality of expectations of a “man”, gender norms and internalized homophobia.

Holden (Spain)
Holden, a young photographer with a short-term memory problem, travels to Paris for a photo session with a successful French actor. The two fall in love from the moment they meet. They spend the night together, walking the streets of the city, aware that it is probably the only night they will have together or is it something they do often? Loved it.

Une poignée de mains (France)
A quick short take on possibilities of what may happen when 2 people meet and how will it end?

The Dazzling Destiny (Spain)
Nico has just been dumped by his first love. He hasn't yet understood how or why but he'll have to face a new day despite the fact that he is still trapped in memories. Wonderfully shot.

The Arrow [Love Pride Truth] (USA)
A beautiful dance performance of love between 2 men as a tribute to Orlando shootings. SO BEAUTIFUL !

Kaleb: Apunte sobre la fugacidad del amor
A love story between two lonely and wounded men. One of them is an escort while the other has hired him. Over the course of their meeting, they understand each other much beyond just physical intimacy.

Bleu Piscine (France)
Blue pool. The water, the sun, Diving, swimming, water drops. A homoerotic tale of 2 men in and around a pool.