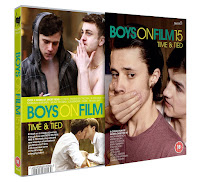 The newest volume in this series is all about short stories from Britain. Sadly and disappointingly, most of the stores in this collection are below average. At least I personally did not connect with most of them.

Closets
We look at the lift of Henry in this time-travel coming of age drama, as a teenager struggling with his sexuality in 1986. Hiding in his wardrobe, he time travels to the present day where he meets up with a similar teenager, Ben, occupying his same bedroom 30 years later.

Putting On The Dish
This is London in 1962, a time when being gay is still a criminal offence.  Two strangers meet in a park and strike up a conversation in slang to talk about their experiences. I did not understand a word of what was being talked about

G o’Clock
After being called out to an emergency, Alex, saves the life of a young boy who had overdosed on GHB. He later arrives at a chill-out and meets Nik, a sexy young Spanish boy who he takes under his wing but soon discovers his caring instincts comes with a dangerous price.

Nightstand
Two men meet over three consecutive nights – one is young and gay, and the other is married. Their tender affair unravels in the night-time metropolis leaving them to face their biggest fears. Interesting but needs more !

Morning Is Broken
At a family wedding Sam meets Nick, who’s fond of vintage cars. He invites Sam to go for a drive, a pact is made and an adventure begins. But maybe Nick has a past that scares him.

Sauna The Dead
A night in a sauna turns into a fight for survival. Two men must over-come prejudice and join forces in taking down a horde of towel-wearing zombies. Who will live to see the dawn?

Crossroad
Liam, a young man wrecked with confusion after an incident that one night guides him on a mission of self-discovery where the choices he faces may risk changing his life forever. Yawn !

Dawn
As dawn creeps across London, two lost outcasts meet in the darkness, as the sun begins to rise, and the veil of the night is lifted, the pair look into the cold light of day for hope.

Trouser Bar
Set in a London gentlemen’s outfitters c. 1976 and taking inspiration from the emotions aroused by the love of corduroy, leather and tight trousers, two men enter Sir John’s Trouser Bar, little do they know the adventure that await them.