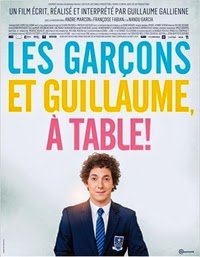 We have seen a lot of coming out gay stories. This one is different. Its about a boy, who everyone around him is sure that he is gay and how he ultimately comes around to break the myth and accept his heterosexuality. Sounds funny! But actually this film is done very very well. Initial few minutes are boring but it does get interesting after a point. Its the kind of movie which strikes a good balance between comedy and emotions.

The film opens as a live premiere of a monologue play by Guillaume, who recounts his days with his family and invariably his mother is part of every single event that he talks about. As far back as he can remember, his mother treated him like the daughter she never had. And he doesn't mind because he is in so many ways similar to his mother, to an extent that when he talks, no one can differentiate. All his life, he adored his mum, and that affection, along with much of the sexual-identity confusion it caused, comes across loud and clear in the worshipful way he portrays her. He is the kind of kid who invites bullying, shame to their father, ridicule from the brothers. He recounts his days when he was sent to all christian boarding school, how he was so bestowed with girls that he wanted to be one, how he spent some days in England before finally he himself come to a realization that his fascination for girls and their mannerism is not because he wants to be one of them; it is because he likes them and it was because of his mother's pressure and love that absolutely everyone was convinced that he is gay.

Portrayed as a one man show for a huge audience, Juggling laughter, pity and poignancy throughout, our protagonist bares his most embarrassing memories for our amusement, and though it’s easy to relate to the shame he may have felt in the moment, there’s strength in the way he retroactively takes ownership of the entire experience. It’s all cleverly constructed to blindside us with the surprising way the story turns out. Acting is top notch. The best part worth applauding is the writer-director of the film also plays 2 diametrically opposite parts; that of Guillaume and his mother. It takes you a while to realize that. He is so good in both roles. You smile, you laugh, you sympathize, you cry -- there's so much emotions, sensitivity, wit in this movie The film is ode to a mother's profound attachment to her son, it may be overbearing, but despite what happens the bond remains.